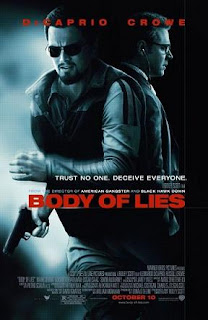 This twaddle about terrorism and the CIA is mixed-up and convoluted. It's the kind of massive, dull, film that makes you think the occasional explosion or torture scene is climactic, when really it's just a minor interruption to the plodding rhythm of a movie that's too high-minded and pseudo-intellectual for its own good. It's proof that two respected actors and a well-known director (Ridley Scott). can pick a bummer.

I've never been completely sold on DiCaprio anyway. He's certainly got talent (and he shines in the right part, such as in Catch Me If You Can), but he often fails to be convincing in the roles in which he's cast. Did anyone really forget it was Leonardo DiCaprio they were watching rather than Howard Hawks in The Aviator? Blame it on the youngish face that has kept him looking 25 even at 35 (and older). You're always aware that he's acting.

On the other hand, Russell Crowe looks and sounds better than he acts in this movie. He becomes immersed in the character at the surface level, but he never gets the delicious breakout scene we're expecting. There's no meltdown. Even when DiCaprio's character pushes him out of his chair (a funny scene that gets underplayed, even dismissed, because this movie is too serious to really care about humor), Crowe's character reacts with phony finesse, and lifts higher our anticipation that he'll blow a gasket sooner or later. It doesn't pay off. Crowe puffed himself up to play DiCaprio's sleazy and slick good-ole-boy boss, a doughy Southern scoundrel who's too much of a coward to do anything but pull the strings and push the buttons. He's placed with the obvious intention of conjuring up the image of any number of politicians in recent history. but his character has nothing likeable.

This is a movie that's bungled by its own high-falutin aspirations, not to mention its relentlessly sluggish pacing. It's trying to be hip and complex, and as a result, its true intentions are too cloudy to be clear. The movie fails to resonate with the viewer. Actress Golshifteh Farahani breathes some life into the muddle for a while, as DiCaprio's Jordanian love interest, and Oscar Isaac registers well as one of DiCaprio's partners. (He played the scummy Prince John in another, better, Ridley Scott-Russell Crowe movie, Robin Hood).