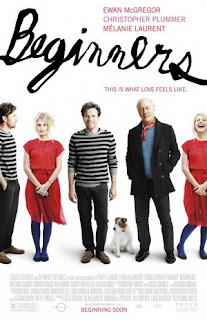 Too pretentious to be interesting. Beginners feels like a movie that's supposed to be good for you: it's full of realism, a somber dose of the tragedies of life and the breakdowns in human relationships that stay broken and unmanaged for years, often going to the grave that way, in a state of arrested development, shell-shocked critical condition. In that sense, Beginners has no actual feeling at all. We begin to acquire a sense of having been sedated as we watch real life unfold and wonder when the movie is going to start.

The story, which meanders with little actual purpose, can be summed up in about the sappiest, most harebrained fashion imaginable: it's about lost chances and new beginnings: 38-year-old Oliver can't seem to make a relationship last, so he's full of doubts when he falls for a French actress (Melanie Laurent). He's also trying to make sense of the loss of his parents within a relatively short span of four years (not to mention their cold and loveless relationship for 44 years, which he learns stemmed from his father's latent homosexuality). Bereft of his wife, the father (Christopher Plummer) comes out of the closet and embraces his inner Gay.

The movie reaches for something powerful and moving but stops short deliberately to avoid being pegged as sentimental or sappy. It wanders in search of the movie it refuses to become. We keep being confronted with these kinds of movies: they're largely independent, and they're largely marketed as some kind of realistic alternative to the high drama we saw in those glossy 1950's soapers, like All This and Heaven Too and Suddenly, Last Summer. Those movies hovered precariously into the atmosphere of camp, whereas movies like Beginners go the opposite way, reaching, rather limply, toward indifference. Maybe that's why Todd Haynes's Far From Heaven (2002) made such a strong impression on me. It was throwback to those 1950s movies where the emotions ran the gamut. If nothing else we could laugh at them. In Beginners it hardly seems appropriate. Like giggling at a funeral.

Anything, even camp, would be a refreshing change from Beginners, which stays comfortably at room temperature. The emotions are there, but they're stifled. We feel for the characters anyway, because director Mike Mills is adept at organizing the right images together (and he has a solid cast to work with). How could you not feel pity for a giddy, grandfatherly type--Captain Von Trapp, nonetheless--who's dying of cancer? There's a scene where he finds out it's too late to continue with treatment, and he has a painful, wrenching expression on his face: life has played a cruel joke on him, and we see the wretched irony in his expressions.

Seeing Beginners is neither cathartic nor entertaining, it's just a bummer. Especially if you were looking forward to your Friday night.

Side notes: the relationship between Oliver and his late father's Jack Russell terrier is the closest this film comes to being endearing. It's genuinely touching. Also, Mary Page Keller plays Oliver's mother in flashback, and her scenes are among the film's brightest spots. She's so jaded by the squeaky clean banality of domesticity--and the grim realities of a loveless marriage--that she likes breaking little social conventions just for the hell of it. Her son carries that tradition into his adult life, but somehow those scenes don't register as well, and the movie doesn't do enough of that--doesn't appropriate enough of that droll humor--to really get anywhere with it.