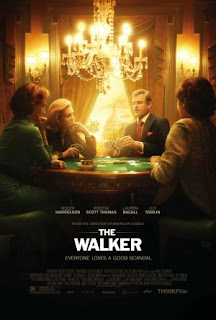 The Walker (2007) stars Woody Harrelson as Carter Page III, a male escort living in D.C. who becomes mixed up in a murder investigation. The corpse--who was a lobbyist--was having an affair with Harrelson's married friend (Kristin Scott Thomas), whose husband is a politician. The movie opens with Carter playing Canasta with Thomas and two other friends, played by Lily Tomlin and Lauren Bacall (more on them later). The weekly card game is merely an excuse for the four of them to gossip about all the latest D.C. social scandals, since all of them are connected to government one way or another. Tomlin's character is married to another political player (Ned Beatty).

Carter's father was a career politician, and he's been living under the man's shadow all his life. The son is gay, hardly a badge of honor in the South, particularly for the son of a Southern politician. He's spent his whole life speaking in superficialities and living his life on the surface of things. He seems to read people's aspersions on him even before they do, and as such he's become extremely guarded. He uses his quick wit as self-defense.

The very idea of a character like Carter Page is like really bad, ultra-cornball Tennessee Williams. Harrelson hails from Texas, and the accent we're used to hearing from him is, I think, natural enough for this movie's purposes. But the twangy Mississippi drawl he adorns in The Walker is too much. It's an irritant, and it gets in the way of his performance. The director, Paul Schrader, may have been wanting it to serve Carter's character and be a reminder to us that he's from the Deep South. Going back to the Tennessee Williams connection, perhaps it makes the drama more dramatic in the director's mind. What's always interesting about Tennessee Williams, though, is the monumental state of denial in which his characters steep themselves. In The Walker, it's not so much denial but acceptance. Carter is a realist, and he's doing what's necessary to survive in the current social and political climate.

What's most striking about this movie is probably the presence of Lauren Bacall. She was always a pistol, and at nearly 83 (in 2007), she's still got it. She has such a knowing ease in front of the camera that you just sit back and enjoy her. She plays the part with relish, and you always feel as though there's much beneath the surface that's not being said. Yet it translates tacitly because she's such a good actress. Lily Tomlin is also good, but then again she's a pro too, just not quite as long in the tooth as Bacall. Kristin Scott Thomas plays the undersexed politician's wife with poise and dignity, but perhaps not enough curiosity or warmth to make her character very sympathetic. She's the one Carter is trying to protect, and she's not much of a friend.

Woody Harrelson is a good actor, but I just can't get behind that accent. It's not a bad accent per se, but it's so thick that it just spills over the top like foam, rushing over and eventually engulfing the character, and if this were Cat on a Hot Tin Roof that would be suitable (though hysterically funny). But then it's not Cat on a Hot Tin Roof. Other characters in the movie have these pet Deep South accents, too. Granted, there are plenty of Southerners in D.C., but the movie not only borrows the accents of the Deep South but the ultra-ring-wing political demeanor too, and uses this to make Carter's homosexuality an issue. It's as if the director, Schrader, wants this to be the gay version of In the Heat of the Night, but he's not willing to go far enough for that. And in the process of trying to be subtle in what the film says, it says very little, except something we've already heard before: Carter can't measure up to his father, and he's been trying to impress him even though his dad's been dead for ten years. Well, okay. What now?

The Walker has moments of tingling excitement, like when Carter's boyfriend (Moritz Bleibtreu) is accosted by a goon at a bar and beaten up pretty roughly. That scene comes almost out of nowhere, because the film is going at a pretty slow pace. Schrader must have decided it was time to wake up the audience at that point in the movie. There's also an obligatory sense of dread you get from watching this kind of movie. It reminded me of The Ghost Writer (2010) in some ways. Both movies have a certain chilling banality to them. And The Walker isn't entirely unsuccessful, but it feels slight, and it also strikes me as a disappointment that Harrelson denies the best aspects of his persona and his acting talent in order to pursue a more "serious" role. He has a natural streak of comedic insanity that he suppresses here. In The Walker, he's like a macho Truman Capote. He's trying to outwit you with his charming good looks and his sly too-clever cleverness. Still, it could have been worse.
by Jacob Lusk @ pannedreview
Email ThisBlogThis!Share to TwitterShare to FacebookShare to Pinterest
Tags 2007, Kristin Scott Thomas, Lauren Bacall, Lily Tomlin, Paul Schrader, Woody Harrelson