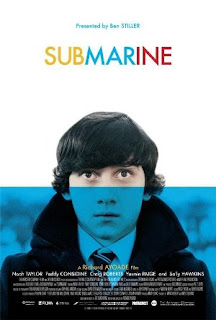 Richard Ayoade's Submarine (2011) is a coming-of-age story about Oliver Tate, a 15-ish year old boy growing up in Wales. Oliver fancies himself the hero in the story of his life. He narrates the movie, which is divided, with tongue in cheek, into sections. Oliver's grand view of his own middle-class adolescent life is made a spectacle on the screen, but not for schadenfreude. We laugh with him rather than at him, because we identify with him and his idiosyncrasies. We're also keenly aware that he is like us. He's our underdog imported from the UK. He gets beat up at school, when he refuses to publicly proclaim the bully's ex-girlfriend a slut, and his valiant act of chivalry wins him over to us. So his grand, inflated perception of his life is charmingly quixotic. And yet he's not out of his head. He seems aware of reality, perhaps more conditioned and adjusted to it than most. He also tries to fix things. He isn't given over to cynicism, just perceptiveness.

The movie's visual playfulness (lots of cutting back and forth and cinematographic tricks that are deliberately maneuvered to get our attention) is in fact a part of its deadpan humoristic style. It has the look of those so-called important foreign films that fiddle with the camera and the editing more than mainstream American movies do. It doesn't look experimental, but it's offbeat enough to be noticeable--and even refreshing. It reminded me ever so slightly of Terrence Malick's The Tree of Life, except Submarine has infinitely more narrative drive. It's also a lot funnier. Without a sense of humor this movie would have been dreadfully heavy-handed.

Oliver's coming-of-age results from two important events: The girl for whom he incurred a punch in the nose becomes his girlfriend, his mom starts flirting with the wacky mystic living next door. (We find out later that he was her first love, so Mom is experiencing a nostalgic kick, exacerbated by the now sterile relationship with her practically comatose husband, who's a marine biology nut). Oliver's girlfriend introduces a lot of new adult feelings, from lust to grief (her mother has cancer). He's tormented also by the threat of his own parents splitting up. And the sort of off-kilter, mildly annoyed relationship he has with them turns out to be more important to him than he realized before. Ultimately, Submarine's villain isn't the bully or the cheating mother, but Blandness. Oliver sees nothing around him but banality. That's the reason his mother starts flirting with the kooky Ninja next door (who gives seminars on translucency or transcendence or some other such nonsense).

The actor who plays Oliver, Craig Roberts, approaches the part with a deadpan facial expression that belies a certain passion for living, one that is awakened by the events that unfold throughout the movie. He seems to walk through his life--and this movie--in a dreamlike state, but he's attuned to the dream and its visceral impact on his senses. And he's such a deeply layered character that you know there are whole other stories to be told about him and through his eyes. And he's wonderfully funny, too.

The movie has that sense of triviality that so many of the independent films seem to relish. They're not the grand Tennessee Williams-style dramas that Hollywood used to roll out every year, in CinemaScope. Those factory-made family sideshows are entertaining in their glossy campiness. And we may think that we have grown past them in our movie tastes, but that kind of high camp drama lives on today in just about every dramatic television show on the air. Movies like Submarine seem almost slight in their movement away from the grandiose. It's a lovely little film, though.