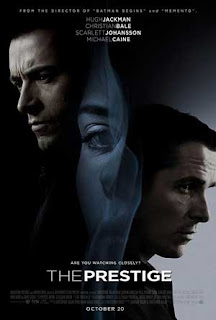 The Prestige (2006) is about two magicians in London at the end of the 19th century, both vying for the public's attention and acclaim. It's an interesting idea that was bungled, possibly before Christopher Nolan, the director and co-writer (along with his brother, Jonathan), ever began working on it. As a director, Nolan tends to inflate his movies. He enjoys hatching labyrinthine plots, and tinkering with time and manipulating the viewer's emotions. That's all fine and dandy, but the problem with most of his work has been a certain hollowness that may naturally proliferate as a result of his best intentions to be clever and grandly mysterious.

This is a movie about magic that's absolutely lacking in any sense of wonder or excitement. I didn't care about any of the characters, despite the interesting cast that was assembled (including Michael Caine, Rebecca Hall, Scarlet Johansson, David Bowie, and Andy Serkis). It was all lifeless, uninvolving. Christian Bale does his usual thing as one of the magicians, the darker, more obsessive one. Bale acts with his facial expressions, or should I say, expression. He rarely shows more than the one. He frequently plays dark, deeply disturbed characters, to the point that everything he does blends into something indistinguishable. There's not much difference between this and Batman Begins or even American Psycho, except that he laughed more in American Psycho. He was a certifiable sociopath there. Here he's just a mad genius.

Hugh Jackman plays his American rival and nemesis, and he's the more commercial of the two. Jackman has an engaging quality about him, but he's played as the heavy. He's in it for the money, and even admits, readily, that Bale is the better magician. Their careers and their lives mirror those of certain Hollywood directors: say, Orson Welles in the place of Bale's character, and Steven Spielberg in the place of Jackman's. One a masterfully intuitive filmmaker and the other a master, epic-scale showman. Welles's entire career was troubled because of studio tampering, financial turmoil, and inner-conflict. Spielberg has always been the darling of the studios because he's always been able to make a lot of money with his films, some of which are genuinely marvelous, and some of which are shamefully commercial and uninteresting.

The two magicians develop a deep and mutual rivalry, and the movie is full of the tricks they play on each other. The idea of The Prestige reminded me of Sleuth (1972), which was directed by Joseph L. Mankiewicz and starred an aging Laurence Olivier and a youngish Michael Caine. Olivier played a respected English mystery writer living in a beautiful, ornate mansion in the English countryside, and Caine was the young Italian immigrant (there's a great line where Olivier assures Caine's character that he could never become English) sleeping with Olivier's wife. The movie was mainly a series of elaborate tricks designed to titillate and terrorize the audience, and it worked. Sleuth was a fascinating entertainment. It wasn't inflated into some large scale dramatic epic, complete with courtroom scenes and a wife hanging herself in the attic. The Prestige wants to be all things to all people, and I suspect this is Christopher Nolan's temperament as a director seeping into the movie. He's certainly got it all, except for the kind of kinetic excitement this move requires. This is a soap opera between two magicians, and it's too stilted to generate any real movie magic.

Nolan continues to get hung up on big ideas to satisfy his baser cinematic instincts and passions. He clearly likes pulp, but doesn't approach it in the right way. He dresses it up with superficial sophistication. The thing that people enjoy about a Quentin Tarantino movie is its unashamed dedication to that low pulp entertainment. When I watch Nolan's movies, I sense the desire to deliver that kind of true enjoyment, but it's tainted by a need to be the smartest director in Hollywood, the one who "really makes you think," as more than one person has said to me about him.
by Jacob Lusk @ pannedreview
Email ThisBlogThis!Share to TwitterShare to FacebookShare to Pinterest
Tags 2006, Christian Bale, Christopher Nolan, Hugh Jackman, Michael Caine, Rebecca Hall, Scarlett Johansson