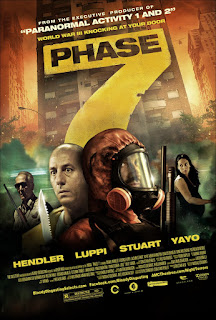 Phase 7 (2011) is an Argentinian import that bears the mark of American exports. It's a science-fiction thriller that will remind you of George Romero's The Crazies (1973) and Dawn of the Dead (1979) and John Carpenter's Assault on Precinct 13 (1976), and probably a lot of other apocalyptic thrillers you've seen. (Precinct 13  may not have been exactly apocalyptic, but it depicted the breakdown of the police at the hands of a relentless gang, and that's a distressing enough signal to the viewer to feel like a local apocalypse). This is the apocalypse, on a budget.

In the wake of a worldwide epidemic, a young man and his pregnant wife find themselves quarantined inside their Buenos Aires high-rise. The plague is never named or explained, and they're told by health officials to simply stay put and make as little contact with others as possible. Inside the largely untenanted apartment, some of the residents go a little stir crazy (or perhaps it's the onset of the disease, which is so undefined it can become anything the viewer wants to read into it). Soon one of them becomes paranoid and violent, and the other neighbors are forced to defend themselves against his shotgun.


It's a funny, fast little romp--violent, paranoid, gleefully derivative, and cuckoo enough to keep you wondering what the director, Nicolas Goldbart, is capable of. He also wrote the screenplay, and his movie resembles that early scene in Dawn of the Dead when the soldiers raid the run-down apartment complex looking for walking corpses. The gas masks and the sanitized-looking uniforms, designed to ward off infection, also evoke memories of Romero's cheap, earlier Crazies, which was remade last year. In The Crazies, Romero basically recreated the situation of Night of the Living Dead, but made it seem slightly more credible. Phase 7 has clearly been indoctrinated into those kinds of movies. It somehow finds its own unique, scaled-down story within that framework, and those who are inclined will find deem it satisfying entertainment.

It will be playing this Friday at AMC Orange Park (midnight, so technically Saturday). It stars Daniel Hendler, Jazmin Stuart, Yayo Guridi, and Federico Luppi.
by Jacob Lusk @ pannedreview
Email ThisBlogThis!Share to TwitterShare to FacebookShare to Pinterest
Tags 2011, Daniel Hendler