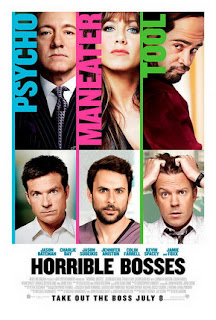 What's most fun about this movie is seeing Kevin Spacey, Jennifer Aniston, and Colin Farrell playing audaciously horrible human beings who drive their subordinates (Jason Bateman, Charlie Day, and Jason Sudeikis, respectively) to want to murder them. Aniston hasn't been this much fun in years, and you probably already knew Spacey was made for this kind of live-wire psychotic CEO part. Farrell is the least recognizable (physically), and yet you get the feeling he's had some experience playing the "tool" before.

Horrible Bosses may not score any points for originality (it acknowledges its plot similarities to Hitchcock's Strangers on a Train and ignores its similarities to the Jane Fonda-Lily Tomlin-Dolly Parton workplace comedy Nine to Five), but at least it treats us to some moderately dark humor delivered with nothing but fervent zeal from its cast. Most of them seem delighted to be playing such over-the-top characters for once. Bateman and Sudeikis pretty much do their usual schtick. Charlie Day scores highly as an easily agitated dental assistant whose boss (Aniston) has been sexually harassing him with impunity.

Midway through, the movie takes an unexpected turn that changes it from a darker version of Office Space to a darker version of the afore-mentioned Nine to Five, which was about three women kidnapping their sexist boss so that they could make some worker-friendly changes in the office. It's the kind of wish fulfillment fantasy employees will cheer for, and yet there's always a bitter feeling in the back of your mind that you're rooting for three would-be killers.

Horrible Bosses ties things up too conveniently at the end, but it's a diverting enough hour and a half. Directed by Seth Gordon. With Jamie Foxx and, in a bit performance, Donald Sutherland.
by Jacob Lusk @ pannedreview
Email ThisBlogThis!Share to TwitterShare to FacebookShare to Pinterest
Tags 2011, Charlie Day, Colin Farrell, Donald Sutherland, Jamie Foxx, Jason Bateman, Jason Sudeikis, Jennifer Aniston, Kevin Spacey