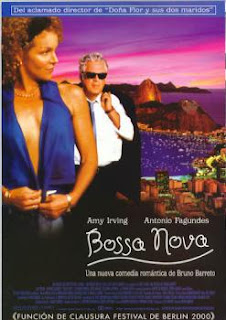 Amy Irving has an elegant discreetness about her that comes with classical theatrical training. Irving grew up surrounded by the theater: her father, Jules Irving, was artistic director at the Lincoln Center for many years; her mother (Priscilla Pointer) is an actress of the stage and screen. Irving attended the American Conservatory Theater in San Francisco, and then the London Academy of Music and Dramatic Art. She's beautiful and charming, but she's often miscast, or directors don't elicit from her the performance she's capable of. She's one of only a handful of actors to be nominated for an Oscar and  a Razzie (awards for the worst in movies) for the same performance (1983's Yentl), and she's also an incredibly talented singer, lending her vocals for Jessica Rabbit's risque musical number in Who Framed Roger Rabbit (1988), which was produced by Irving's first husband, Steven Spielberg.

Irving gave a fine performance in the yuppie romantic comedy Crossing Delancey (1988), which had roots on the stage and, given its New York setting, was perfect material for her. In Bossa Nova (2000), which was helmed by Brazilian director (and Irving's then-husband) Bruno Barreto, she has to push through that ice queen elegance to fit the whimsical mood of this breezy rom-com, in which she plays Mary Ann Simpson, a widowed teacher of English who lives in Rio de Janeiro. (I wondered if the writers could have come up with a blander American nomenclature than "Mary Ann Simpson"?)

Bossa Nova moves along at no particular pace, but it has a rhythm you become accustomed to, and an assortment of amusing characters populates its world. The touristy setting of Rio de Janeiro is portrayed in an altogether different light: we see the people who actually live there, and we also get inklings of their perceptions of America and Americans. (There's a throwaway line about how much Americans respect art and how artists are all well-paid in America).

Irving's friend Nadine (Drica Moraes) likes to visit online chat rooms, where she has developed a cyber romance with an "artist" in "Sojo." (Incidentally, it was amusing to see how technology--particularly computers and cell phones--has changed in just a decade). Meanwhile, Mary Ann is pursued by a horny professional soccer player named Acacio (Alexandre Borges) as well as a soon-to-be-divorced lawyer named Pedro Paulo (Antonio Fagundes), who's still in love with his wife (Debora Bloch) even though she's living with somebody else. He starts going to the night class Mary Ann teaches. He's also trying to save his father's tailor shop from being lost in a divorce settlement. His brother becomes infatuated with Pedro's pixie of an intern (Giovanna Antonelli), but she's too young and restless to settle for a sensitive tailor who has a good ten years on her. She winds up with the soccer player, and there's a funny scene--reminiscent of screwball comedies--where they consummate their infatuation in Pedro's office.

Bruno Barreto's direction is a bit imprecise, but at least it's not heavy-handed. Sometimes it feels as though the movie might never end, but it's perfect summer fare. It has something of a Woody Allen vibe to it, without Allen's sharp wit. This is a much subtler and unfocused but energetic and readily appreciated wit. Bossa Nova is a romantic comedy that doesn't make you hate yourself when it's over, and that's something. It doesn't gloss over the imperfections of relationships, but rather pokes good-natured fun at them. There are some delightfully scandalous daydream sequences that bring out Irving's carefully enshrined sexuality. She shows us she can be playful and have a good time. And there's a hysterically funny exchange between Mary Ann and Acacio where she's teaching him the various contexts for English curse words. It may slip out of your head as soon as it's over, but while it's on, you'll find yourself happily lost in its Midsummer Night's Dream-esque game of missed opportunities and offbeat attractions.
by Jacob Lusk @ pannedreview
Email ThisBlogThis!Share to TwitterShare to FacebookShare to Pinterest
Tags 2000, Amy Irving