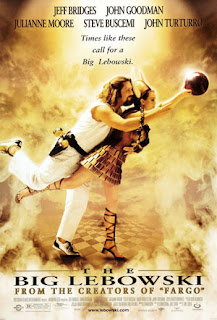 How does a movie acquire a cult following? The people at the not-quite-midnight screening of The Big Lebowski (1998) seemed to frolic with this movie. They were laughing like it was the first time they'd seen it, yet I imagine they'd all seen it multiple times. (Many were quoting the dialogue with the movie or even talking over it because they knew exactly what was happening onscreen). This was my first time seeing The Big Lebowski. It's one of those movies you're scolded for not seeing. People love their Coen Brothers movies with a palpable ferocity. It's bizarre until you can find yourself within that kind of ferocious love of a movie.

I'm not partial to the Coen Brothers. No Country For Old Men may be their best work, but it's also pretty hollow inside. One of the most prominent storytelling flaws in their work is the stupidity of their characters' actions. But, in the world of the Coen Brothers this is a device or a bit of storytelling genius rather than a flaw. They try to paint the characters as more real because they do stupid things. It works out being a bit infuriating--and alternately comical, depending on the moment.

As much as this movie is about anything, it's a hodgepodge of old noir movies set in L.A. The Coens appropriate elements of Howard Hawks's The Big Sleep, and Robert Altman's The Long Goodbye, and Jack Smight's Harper. But you soon realize that the plot, about a guy (Jeff Bridges, playing the ultimate chronic loser with a flair for bowling and a penchant for White Russians) who's hired to save a crippled millionaire's kidnapped wife, is subordinate to the movie's stoner inhibitions. Bridges' character calls himself the Dude, and it's a pretentious attempt to adorn this movie with qualities that will make it what it's become, an oddball midnight movie. This theater is never packed, and it was packed.

Julianne Moore shows up as the eccentric daughter of the invalid millionaire (see The Big Sleep and Harper). She resents the hell out of her sex-kitten of a step-mother (see Harper). There's also some strand of yarn about a weird-ass cult (see Harper again). And the movie has that affectless feel that Altman most certainly wove into The Long Goodbye. No one really cares about anything. Except bowling. John Goodman gives a volcanic, uproariously funny performance as Bridges' nutso bowling partner, a Vietnam vet who's obsessed with the past and completely in love with his war vet status. Steve Buscemi plays their sidekick, the brunt of their jokes and hostility and fellow bowling buddy.


I find myself riddled with mixed emotions about this movie. I laughed a lot at the craziness onscreen. It's got moments of pure madness, and the movie's nightmarish cast and nightmarishly lackadaisical story are something to be seen, but it also bugged the hell out of me. It's visually stylish and stylized (replete with trippy drug-induced dream sequences that might have come from the mind of David Lynch), but uneven. There may be reasons to care about the characters, but only if you're willing to like their idiosyncrasies. And it's dreadfully repetitive, particularly the dialogue, which is like bad Tarantino. Goodman's character was exasperating, and you wanted him to get abused more than he did (although he also delivered some truly good moments of comedy). Bridges' character constantly bungles things in a way that grows quickly tiresome. Bridges is a solid actor, though, and he carries a movie that's practically been amputated at the gut.
by Jacob Lusk @ pannedreview
Email ThisBlogThis!Share to TwitterShare to FacebookShare to Pinterest
Tags 1998, Jeff Bridges, Joel and Ethan Coen, John Goodman, Julianne Moore, Philip Seymour Hoffman, Steve Buscemi