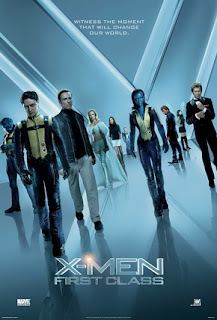 A friend of mine accused me of being out of sync with popular culture because I expressed a lack of desire to see Thor. I had an equally strong feeling of malaise when it came to the new X-Men movie, particularly because I remember seeing X2 a number of years ago and being bored out of my mind. X-Men: First Class was better than I expected, but not by much. The characters were fairly interesting, but the movie suppressed any of the humorous aspects of its plot. Every time it let loose for a moment to be light and let you laugh at the weirdness of its characters, it seemed like the director was pulling on the reins, reminding everyone that this is a serious freaking superhero movie, people.

The dialogue was rather mechanical. But most of the audience seemed conditioned to it, so hardly anyone laughed at how ludicrous some of it was. More ludicrous still was the movie's attempt to engage with recent political history, inserting X-Men into the Cuban missile crisis of 1962. (Who knew it was mutants that averted World War III?)

Meanwhile, the coming attractions were ominous and depressing: nothing but wretched apocalyptic superhero movies all summer, as though turning off your brain is the only option at the movies between May and September. It's so unfortunate that the good movies are shoved into one tiny part of the calendar. There are always surprises, but they are the exceptions. X-Men: First Class was okay for what it was, but after a while it's all the same, and you keep wondering why people are still paying to see this stuff over and over again? The 2009 Star Trek was much better.

Popular culture includes, but is not limited to, mindless superhero fodder. Unfortunately, it seems like the only thing studios are willing to risk any money on during the summer. We're at the mercy of people who care about money much more than they care about the movies. It's like we're supposed to feel lucky X-Men was mediocre. But should we be content to settle for mediocrity and elevate it to a status of greatness simply because it's not quite as bad as the rest of the drivel out there?

despite the rampant mediocrity in the flick, it was great fun being there with you and the guys
Great post!