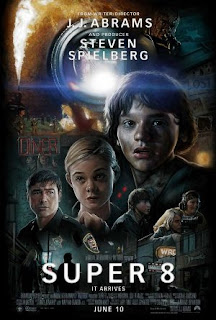 E.T. meets Stand By Me meets The Goonies meets Alien. J.J. Abrams is trying to be the new Spielberg. He's introducing popcorn movies with heart for the youtube age, such as Cloverfield, which was shot in documentary style, entirely from the point-of-view of a handheld camera. Super 8 further develops the director's love of movies without the obnoxious shaking camera. Abrams, who wrote the script, is much more interested in the relationship between five middle school age boys (and one girl), who are trying to make a zombie movie and submit it to a local student film festival. The film is set in a small Ohio town in 1979, and the bossy, self-proclaimed director of the movie has just seen Dawn of the Dead and wants to replicate its success. His bedroom is decked out in movie posters and memorabilia--a wonderful blender-room of popular culture of the late 1970s.

However, a train collision, which the kids manage to capture on film, changes everything. The military arrives to retrieve the train's mysterious cargo, and afterward they descend upon the town without telling the public why. Meanwhile, the kids start trying to piece together the mystery for themselves. But the less you know about the plot of Super 8 the better, because Abrams reveals things slowly (he's of the old school where you show as little of the monster as possible to build up audience anticipation). He makes the kids fun and engaging. Their stories are unique, their ambitions are sincere, and their attempt to look and act like adults is charmingly funny.

The performances are quite good. The lead part of Joe Lamb is played by Joel Courtney, who does a remarkable job carrying the movie, the way Henry Thomas did in E.T. (when E.T. himself wasn't stealing the show). His father is played by Kyle Chandler, a local deputy, who bears a striking resemblance to the actor Stuart Whitman. Elle Fanning plays the girl Joe is in love with (she's also the ingenue for the zombie movie). The rest of the kids are played by Ryan Lee, Zach Mills, Riley Griffiths, and Gabriel Basso.

Super 8 works because of the humor and because J.J. Abrams has such masterful control of the cinematic conventions he's apparently been soaking up all his life. While the alien plot doesn't score points for originality, it's wonderfully simple, and the movie doesn't feel as fetishistic about explosions as the rest of the crap that's coming out this summer. It becomes a bit booming at the end, but Abrams has done the work of winning us over long before he pulls out the eye candy. Yes, a good story is still enthralling (much more so than special effects and explosions), and you will find one in Super 8.
by Jacob Lusk @ pannedreview
Email ThisBlogThis!Share to TwitterShare to FacebookShare to Pinterest
Tags 2011, Kyle Chandler