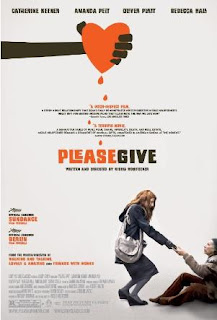 Please Give is a movie about the tragedy of existence. If that sounds like hell, that's because it is. Nicole Holofcener, who wrote and directed the movie, is keenly aware that her subject matter is grim and unappealing. She laces each scene with comic undercurrents. They're not throwaways--they're more like hilariously grim reminders that there isn't much value in taking things too seriously, whether it's age, work, or social relationships.

It's set in New York City, a place that seems ideal for capturing the feeling of a lost soul wandering through a sea of other lost souls, invisible in the noise and the quiet desperation. Kate (Catherine Keener) and Alex (Oliver Platt), a husband and wife who buy furniture from the children of dead people, are waiting for their 91-year-old neighbor Andra (Ann Guilbert) to die so they can expand their apartment into hers (which they've already purchased). Andra has two granddaughters, Rebecca (Rebecca Hall) and Mary (Amanda Peet). While Rebecca masks her disdain for her grandmother by taking care of her like a dutiful grandchild, Mary is openly hostile toward her grandmother. Andra doesn't give a shit about anything. She's too old to care about maintaining relationships, and her body parts are failing, rapidly decaying her quality of life.

Rebecca is a radiologist who specializes in mammograms. She deals with the beginning of death, the initial shock of bad news. Andra stands (or rather, hobbles) at the thresh-hold of death, waiting to go just as everyone else is waiting for her so they can move on with their lives. Kate works in the aftermath of death. She's got a bleeding heart but can't seem to find a way to deal with it. She keeps giving money to homeless people. And she tries assuaging the guilt she feels (for being some kind of Antiques Roadshow Grim Reaper) by helping the less fortunate, or at least thinking about helping them. She tries visiting with the elderly, then the mentally disabled, but she's all jelly inside and gets overcome by her own sympathy. It's like the sympathy she feels--as well as the correlating sense of helplessness--is the only thing that gives her life meaning. Kate wants to stop feeling guilt, but she isn't willing to really change the things that make her feel guilty (or think about why they do). Moreover, she's unwilling to face the bleak realities of her marriage and her relationship with her daughter, played by Sarah Steele.

Keener's character is just irritating. The things she doesn't seem to be aware of are matched only by her disgustingly patronizing good intentions. Peet's performance is wonderfully vivid as Andra's beautiful elder grandchild, who feels like a loser despite her beautiful features. She's having an affair with Alex for some untenable reason. Her callousness is made to be a point of comic release for us. It's like she says what we're thinking. She vents the inner frustrations of her nicer, shell shocked sister.

The performances make Please Give worth seeing. It has a slightness about it though, as though we will forget what we've seen. The humor--which is deep at the heart of the movie--lets us laugh at the characters' sense of self-seriousness, drawing something much more real out of them. But watching Please Give is also like catching a little glimpse into the lives of real people. Holofcener explored similar stories of frustrated women in Friends With Money. She's making good movies that aren't getting seen by very many people, but you can check out Please Give via netflix's instant streaming feature.
by Jacob Lusk @ pannedreview
Email ThisBlogThis!Share to TwitterShare to FacebookShare to Pinterest
Tags 2010, Amanda Peet, Catherine Keener, Nicole Holofcener, Rebecca Hall