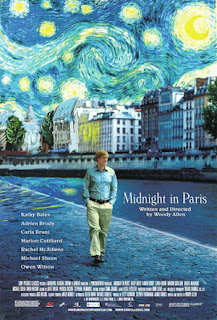 Woody Allen has always approached the fantastic without feeling a need to explain it or unravel its mystery. He's dealt with the collision course of the real and the unreal in such films as The Purple Rose of Cairo (1985), where a movie character leaves the screen and enters the life of a Depression-era waitress played by Mia Farrow; and, more recently, in Sleuth (2006), which was a wonderfully witty mystery yarn where we witnessed the murdered victim's journey down the river Styx, where she expresses her frustration over the events that lead to her death.

In Midnight in Paris, Allen takes us to the City of Light and layers it with the mysterious undercurrents of time travel. Owen Wilson plays Gil, a would-be novelist who's bored and dissatisfied with the success he's had as a self-proclaimed hack screenwriter. He's lost his sense of enchantment with movies, turning instead toward literary pursuits. He dreams of living in Paris in the 20s, when all the expatriates were there on seemingly never-ending holidays, drinking and dancing and having deep, sophisticated conversations into the night; and falling in and out love; and realizing the vision of their art.

Instead, Gil is visiting Paris with his fiance, Inez (Rachel McAdams), who's not very enchanted by Paris, at least, not at first. Gil's hoping for stormy weather so he can stroll through the city in the rain. She's perplexed by this, views it as eccentric. Her parents are with them (they're played by Kurt Fuller and Mimi Kennedy), and they don't connect with their future son-in-law at all. It's as if the city exposes all the differences between Gil's and Inez's personalities for the first time, or perhaps it just illuminates them on a grander scale, and suddenly her lack of romanticism is driving him up the wall. Plus, they unexpectedly meet an old friend of Inez (Michael Sheen) and his wife (Nina Arianda). He's a professor of art, and his knowledge impresses Inez, who admits that she had a crush on him in college.

The stage is set for reality to take an unexpected backseat in Gil's life. He is transported back to 1920's Paris. He meets F. Scott Fitzgerald (Tom Hiddleston) and his loopy wife Zelda (Alison Pill), and Cole Porter Yves Heck), Ernest Hemingway (Corey Stoll), Gertrude Stein (Kathy Bates), Pablo Picasso (Marcial De Fonzo Bo), and Salvador Dali (Adrien Brody), to name a handful. It's the most delightful moment if you go into this movie with absolutely no knowledge of what's going to take place. And especially if you have any interest in the artists and writers of the 1920s, it's like a wonderful dream. Gil finds himself being drawn into this other-worldly encounter every night at midnight, and he begins to develop a romantic interest with Adriana (Marion Cotillard), a muse/lover of Hemingway and Picasso.

Allen's movies of the last few years have had a strangely ineffectual slightness to them when you get beneath their witty, refreshing premises. Midnight in Paris isn't any different in that sense. Beyond the surprisingly fun idea, is a movie that sort of meanders along without anything much to say. Gil learns that you have to live in the moment, rather than dreaming about the past, idolizing it to the point where an era becomes a fantasyland that never really existed. There are moments, however, that make Midnight in Paris a joy. It's the movie's wonderfully intoxicating love of the past that plays with your head even when the "message" is trying to tell you not to worship the past too much. It can be dangerous, after all.  Plus, you'll find that in every era there were people who felt they were missing out for being born in the wrong moment of history.

Allen, who has done quite a few nostalgia pieces, might very well be writing a cautionary tale to himself. Indeed, Gil's character seemed perfect for Allen if this were 1975. Diane Keaton could have been Inez. In 2011, Wilson and McAdams make an acceptable pairing, but I've always found Owen Wilson to be slightly uninteresting. He seems to be totally lacking in intrigue. McAdams has a wonderfully likeable quality, but that is squelched here by a character who's a complete drag. And she's off having a wonderful time with the snooty college professor while her husband is having bizarre experiences that might have been the result of a bad LSD trip.
by Jacob Lusk @ pannedreview
Email ThisBlogThis!Share to TwitterShare to FacebookShare to Pinterest
Tags 2011, Adrien Brody, Kathy Bates, Marion Cotillard, Mimi Anderson, Owen Wilson, Rachel McAdams, Woody Allen