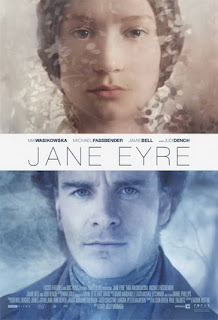 A compact adaptation of Charlotte Bronte's semi-gothic romance, directed by Cary Fukunaga and written by Moira Buffini. It's hard to fathom the skill involved in telling Jane Eyre under two hours without missing the subtle, deliberately paced story elements which have made the book such an enduring tale. What the movie lacks as far as development it makes up for in visual energy and pace. It captures the grimness of the plight of women--particularly lower-class women--and yet there's an ethereal lightness that Adriano Goldman captures in his camera work. He brings a breathtaking sense of vitality to the new Jane Eyre.

The casting is spot on. As Jane, Mia Wasikowska knows how to convey the turbulent spirit of her character. Her passion refuses to be quelled by social conventions. And yet she refuses to disrespect herself or her sense of right and wrong. As Rochester, Michael Fassbender has the right mixture of rugged incisiveness and vulnerability. I think Charlotte Bronte would agree that Rochester is a dick, but Jane somehow sees past the irritating aspects of his personality to the good inside him, the tortured soul.

During the fateful wedding scene (I'll avoid spoilers for those of you who haven't read the novel or seen any of the other film adaptations), I laughed because it seems one of the fixations of Victorian literature has been the tortured hero, the man with a deep, dark secret. It's always such a shock to everyone else, or at least to the heroine, who's so innocent, so unspoiled, that she could never imagine some other kind of life for her darling husband-to-be. Men have the remarkable quality of being both earnestly guilty for our actions and ravenously hungry for more. Robert Louis Stevenson's Jekyll/Hyde character is perhaps one of the best embodiments of this in all of pop literature. Bronte's Rochester is another. He's pure appetite.

Jane makes it plain in the movie that she might be just like him if she could. The constraints put on women at the time forbid this, of course, and the movie is a testament to how wretched was the condition of most women. They were taught propaganda by cruel, hard Calvinists without a speck of compassion in their veins. Jane refuses to believe the propaganda, and Mia Wasikowska somehow manages to convey all the complex emotions of the character with very little dialogue to put her feelings into words. She's a woman who thinks and feels so much more than she can say, and the movie itself is the same way. There's so much tacit emotion within the frames, so much that cannot be contained by the frames. You feel that the makers could have done something even more spectacular with an original work. Adapting Victorian novels seems almost like an obstacle, except that it allows us to experience a kind of oppression (and repression) we might not otherwise understand.

I don't want to spend too much time comparing Jane Eyre the movie to Jane Eyre the book. I think that's an unfair way to look at the latest incarnation of the Bronte story, because I think we should evaluate the movie for what it is, rather than what it isn't. We can't fault the filmmakers for not making a direct translation. What would be the point of making the movie, then? What we can be glad for is a literate, passionate yet controlled movie that isn't bogged down in exposition, and somehow manages to capture a magnetic sense of lyricism. There's not really any romanticism about the past. There's the picture of two souls who feel lost without each other. They're spiritually connected. Near the end, St. John (pronounced Sin Jin) lightly mocks Jane for speaking to Rochester even though he's nowhere nearby. St. John asks incredulously, "why are you talking to the air?" Jane feels a connection to him, an urgent calling. St. John, a devout minister and missionary, whole-heartedly believes in spiritual connections, but not that kind. He's unable or unwilling to consider the possibility. Jane, on the other hand, is willing. She doesn't shut life out, as much as life has tried to shut her out.