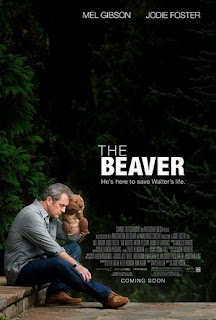 In The Beaver, which is directed by and co-starring the wonderful Jodie Foster, we watch Mel Gibson suffer some kind of nervous breakdown onscreen, and Foster, as his devoted wife, somehow doesn't crack, too much, under all the pressure. Gibson plays Walter Black, the executive of a toy manufacturer who suddenly just stops functioning. Something clicks inside him, something inexplicable, and he's no longer the Walter that his employees, his colleague (played by the elegant Cherry Jones), his wife, or his two sons (Anton Yelchin and Riley Thomas Stewart) knew.

As an eccentric form of coping, Walter adorns a beaver puppet on his hand, and from that point on speaks "through" the puppet (using his Australian accent for the beaver). This brings back to life the old Walter in a new way, but on the other hand, the puppet is weird, and Walter's wife wonders how long this "therapy" will continue.

Meanwhile, Walter's teenage son Porter doesn't get on well with his dad. He didn't before the beaver thing started, and he certainly doesn't now. Porter supplements his income by writing papers for other high schoolers (and charging 200 dollars a pop). He's desperately trying to keep track of all his father's weird habits so he can teach himself to eschew them. With all the money he's saving, he can try and travel in an effort to separate himself from his painful memories.

But what is the true source of the pain? The movie is sort of vague in that department. Obviously Walter changed dramatically and this affected everyone in his life. But why did he change? And how do you classify the change? And how do you fix the change? The Beaver lets these merciless questions linger in the air as its story unfolds, and gradually you stop asking why and accept the realities. I think that's what Jodie Foster and the screenwriter, Kyle Killen, were trying to get across from the start: that most of the time explanations are elusive, and in the end they don't change much anyway.


The movie dances between abject horror and dark comedy at all times. You may be on the verge of tears as The Beaver tugs ruthlessly at your heartstrings, milking you the way certain movies do (soft music swells, and a touching image conjures up memories of your own inner-pain). But the movie, I think, critiques our tendency to be taken in by overly sentimental movies just as much as it tries to take us in, to elicit tears and sympathy from us like an old woman who knows how to look pathetic in order to garner pity.

It seems like some wryly funny comic wind buffets the lowest moments of the characters, whether it's Walter or his wife or his teenage son. When Walter is trying to commit suicide, he bungles it badly, and we've really no choice but to laugh at this poor, pathetic man, who's so screwed up he can't even hang himself correctly.

I liked The Beaver a lot, and I wasn't sure I would. It seemed so eccentric. But Jodie Foster has helped create something worthwhile in this movie. It doesn't seek to answer the problems of life for us, but instead, it has the tenacity to demonstrate how truly disturbed our worlds can become, and then reminds us not to expect too many answers too soon, if ever.