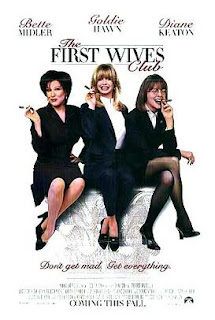 This movie is one of my guilty pleasures. It's uneven and really, considering the sheer quantity of talent involved, it's a bit of a letdown. Based on a novel by Olivia Goldsmith, it's about three college friends (Goldie Hawn, Diane Keaton, Bette Midler) who reunite years later after they've been dumped by their husbands for younger women. Their plan for revenge soon evolves into one where they can channel their frustrations for good. The movie is some kind of rah rah feminist picture, and yet it has moments where it completely contradicts itself. The women spend a lot of time praising their own abilities to beat their lousy ex-husbands into submission, but at the end, when one of the grumpy husbands utters, "you can't do anything to us," they acquiesce that no, they cannot, but the people they have under their control (all men) have the ability to get results. It's a strange moment of inconsistency. The movie itself is a bit formulaic, complete with the montage toward the end where the three leads, frustrated with how things are going, spend the duration of a mushy 90's pop ballad walking with their heads down, consoling themselves with family, and having a good cry. The movie wants to be brassy and gushy in the middle, but I'm not convinced it can have it both ways.
Director Hugh Wilson doesn't always stage scenes the way he should. There's a scene where they sneak into Midler's ex's apartment, and it's built up like something out of a bad spy thriller, with the three comedians screaming and pushing and shoving and freaking out in histrionic fashion. The scene is big but it feels big in a contrived way--factory made comedy with a director's attempt to manage the audiences' reaction.
The talent rescues the movie from its shortcomings. The three leads are too much fun to watch to completely dismiss The First Wives Club, and the supporting cast is to die for: Maggie Smith, Eileen Heckart, Sarah Jessica Parker, Stockard Channing, Dan Hedaya, Victor Garber, Stephen Collins, Marcia Gay Harden, Bronson Pinchot, Elizabeth Berkley. 1996
by Jacob Lusk @ pannedreview
Email ThisBlogThis!Share to TwitterShare to FacebookShare to Pinterest
Tags 1996, Bette Midler, Diane Keaton, Goldie Hawn, Maggie Smith, Marcia Gay Harden, Sarah Jessica Parker, Stockard Channing, Victor Garber