At the Cult Fiction Drive-In 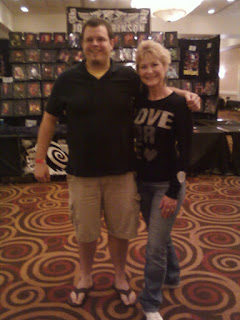 Here's a picture of me with actress Dee Wallace (E.T., Cujo, The Howling, The Hills Have Eyes). I attended my first movie convention, right here in downtown Jacksonville, and it was quite exciting! Pam Grier, the star of Jackie Brown and Coffy, was there, as were many other celebrities from cult films of the 1960s and 70s. It was so exciting to see these folks--it made the little kid inside me thrill with excitement to see so many horror and cult movie icons gathered in one place. There was memorabilia everywhere, including lots of DVDs for sale.

Along with meeting celebrities at the convention, we got to attend a screening of a real cinema treasure, I Was A Teenage Frankenstein (1957), which is exactly what you think it is. Whit Bissell plays a Frankenstein descendant --stubbornly intent on continuing/ improving his infamous ancestor's work-- who tries to put the Grim Reaper out of business by reanimating a dead teenager. The acting was priceless, the dialogue of that rarified quality that only the masters can create. And what can I say about the mad scientist's method of disposing the people that get in his way, except that I no longer trust anyone who keeps an alligator as a pet?

I also got to chat with John Amplas, star of George Romero's vampire classic, Martin (1978) and supporting actor in several other Romero classics including Day of the Dead (1985). Amplas now teaches acting in Pittsburgh, where most of Romero's colleagues hail from. He was a lot of fun to chat with, as were Lynn Lowry and Dyanne Thorne. Lowry starred in Romero's The Crazies, and Thorne was played a whip-wielding Nazi named Ilsa in a number of exploitation movies from the 70s. (I tried to hide the fact that I'd never heard of her or her movies.)

The event is still happening. Tonight there is a midnight screening of a slasher movie called Pieces (tagline: "It's exactly what you think it is!"), and tomorrow they're showing, among other things, Faster, Pussycat! Kill! Kill!.