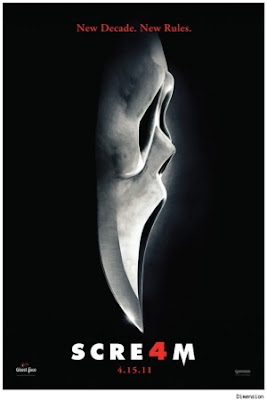 In Scream 4, varsity slasher movie all-star Neve Campbell (known for her performances in Scream, Scream 2, Scream 3, and her appearance on the television series My Secret Identity in the episode titled, "Pirate Radio," in which she played the character of Student) returns, along with David Arquette and Courteney Cox, to her old stomping ground: the murder-laden community of Woodsboro, where a new killer (or killers) (or killerss) is/are/ares proving the theory (espoused by critics in the 1980s) that slasher movies turn audience members into psychotic killers.

Sidney Prescott (Campbell's spunky character), has battled psychotic killers before. She was there from the beginning, and seems like an extra in her own movie in Scream 4. She's the knowing adult victim who tries to pass along her wisdom to a new cadre of savvy youngsters who are too smart for dumb movies until they're placed in dumb movie situations and start doing dumb things. I groaned several times when the car wouldn't start or one of the characters dropped her keys because she got scared by a loud noise.

I laughed a lot too. Sometimes at the movie and sometimes with it. I kept trying to figure out what screenwriter Kevin Williamson and director Wes Craven were up to. Many times they delivered scenes with a wink, and you felt like you were not being played, but being entertained, by a movie that's ready and able to manipulate your preconceived notions about slasher movies. The teenage drama that occasionally bubbles up into the story is of the most low-grade Party of Five quality. The drama between Arquette, now the sheriff of Woodsboro (and still a bit bumbling) and Cox (his wife, a former reporter whose fame is fading) [I'm not talking about the real marriage between David Arquette and Courteney Cox, but the one between their characters] is equally funny. He's laughably trying to squash her into small-town housewife living, but her attempt to regain her relevance in the investigative journalism world is laughable too. I think that's the point of this movie. Everything is so unbelievable it's funny.

The movie has so many characters it feels like a bad Agatha Christie novel, and most of them are developed only just enough. Williamson never met a red herring he couldn't train to fly, sing, and point in the most obvious direction, and in Scream 4 there's no shortage of suspects. That's part of the sheer fun of it all, and that's the reason I wanted to see Scream 4 in the first place: the fun. Enough with the torture-porn industry (Saw and Hostel being that subgenre's best known relics). Horror movies need to be fun and entertaining or they're not fun or entertaining (for some reason). Despite some of the flaws in Scream 4 (perhaps the very fact that there is now a Scream 4), it's an enjoyably campy romp; it makes fun of itself more than the genre it lampooned/homaged/tributed/ in the earlier movies. (Some of those aren't real words. Get over it.) Campbell is more appealing now than she was before, perhaps because she rises above the stupidity of the genre. She's past all that crap, and just gets to arrive in the nick of time to either save somebody or fight somebody, but ultimately she does get included in the blood-bathing.

As mentioned before, the cast is larger than a small-sized cast or even a medium-sized cast. Actors include: Emma Roberts (as Sidney's cousin Jill), Hayden Panettiere as Jill's feisty friend Kirby, who I thought had one of the most fun parts in the movie, Community's Alison Brie as Sidney's opportunistic (and funny!) press agent, Rory Culkin and Eric Knudsen as two film geeks, Marley Shelton as a strange blond deputy, Mary McDonnell (who I didn't recognize until wikipedia told me she was in the movie as Sidney's spacey Aunt Kate), Adam Brody as a dispatchable deputy, and a bunch of extras playing townspeople, other deputies, teenagers, squirrels, birds, and teachers. I really don't have time to name them, although they have probably memorized the precise moment when they appear on screen.
by Jacob Lusk @ pannedreview
Email ThisBlogThis!Share to TwitterShare to FacebookShare to Pinterest
Tags 2011, Courteney Cox, Hayden Panettiere, Marley Shelton, Mary McDonnell, Neve Campbell, Rory Culkin, Wes Craven