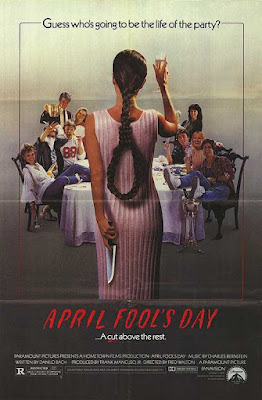 After the success of Halloween in 1978, you couldn't keep a hack director from turning any conceivable holiday into a slasher movie, from Friday the 13th (1980) to New Year's Evil (1980), My Bloody Valentine (1981), and Silent Night, Deadly Night (1984) (not to mention 1975's Black Christmas). Most of those were humorless and bland. The producer of Friday the 13th, Frank Mancuso, decided to make one with tongue firmly in cheek, and came up with April Fool's Day (1986), which is in my opinion the best of the bunch after Black Christmas and Halloween.

It's a free adaptation of Agatha Christie's Ten Little Indians, which is the precursor to all slasher movies. The movie uses the beloved Christie mystery novel to set up its plot of a group of privileged college kids spending spring break at their friend Muffy St. John's lonely island manor, where it seems that April Fool's Day pranks don't always turn out to be just pranks. The sparkling Deborah Foreman, star of 1983's Valley Girl, plays Muffy, who miraculously hasn't turned into a snob despite her wealth and privilege.

The movie has characters you like, and tries to take them a little deeper than most of its ilk. It doesn't succeed all the way, and there's a sense in which you wonder if it could have really nailed the genre and its own storyline better, more sharply, then it does in its admittedly sloppy form. And many story points are loose and undeveloped. For example, someone has planted strange objects in the guests' rooms, but these are hardly touched on, and really are placed in the movie as a mere convenience for the creators to imitate the Agatha Christie story where the characters had all gotten away with murders and were being punished for them.

One of the most noticeable flaws is the cinematography by Charles Minsky. He seems fixated on undermining dialogue by focusing our attention elsewhere. I gather it was a stylistic device, but if so, Minsky could have had a little more vision. He treats the movie's attempt at character-building drama like soap opera scenes, and thus gives them more of an audience than they deserve. There's the couple most likely to get married after college, Amy Steel (the scream queen from Friday the 13th Part 2, who possesses a very likable and natural quality about her) and Ken Olandt (he appeared in the Mark Harmon high school comedy Summer School). They have serious discussions about their futures, and it really just seems like plot filler extracted from The Young and the Restless. (There is a funny scene where they're in bed and the lights have been rigged to not turn off). There are, nevertheless, some effective shots, such as the transition from one of the characters falling into a well full of floating heads to a shot of her sitting, head down, at the table, while the others stand in the background. It's effective and in a way saves that moment of the movie from its clunkiness. (The well sequence isn't particularly believable.)

The characters are believable. One's a calculating Texas frat boy type who's bucking to get a job for Muffy's wealthy father. One is a stilted English major who reads Milton and doesn't fit in with the sex-obsessed, "hip" members of the group. She's the uninitiated (often the character who turns out to be the killer in these types of movies).

The movie is banal but it's also plucky and good-natured, so you have a hard time disliking it. It also makes fun of the cliches on which it relies, and so it may be the first self-aware slasher movie, one which is ultimately playing a deviously fun trick on its audience. The other cast members are Deborah Goodrich, Clayton Rohner, Thomas F. Wilson (Biff from Back to the Future), Jay Baker, Griffin O'Neal, and Leah King Pinsent. It was directed by Fred Walton of When A Stranger Calls (1979) fame.
by Jacob Lusk @ pannedreview
Email ThisBlogThis!Share to TwitterShare to FacebookShare to Pinterest
Tags 1986, Amy Steel, Clayton Rohner, Deborah Foreman, Deborah Goodrich, Ken Olandt, Thomas F. Wilson

I remember the time you and I watched this movie at your old house over off of Alafaya. Good times!