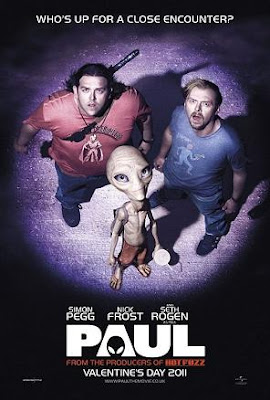 Little Green Men: What a delight to start the 2011 movie year off with Paul. I'd been avoiding the movies all year, partly because I saw so many in December and needed a break, but more because, frankly, the selection thus far completely sucked. Seriously bad. It's important that the first movie you see of the year be one for which you have high hopes. While I had no clue what Paul was about (such a rarity these days to go into a movie almost completely fresh, but worth it!), I knew I liked the work of its stars, Simon Pegg and Nick Frost. They're the guys from Shaun of the Dead and Hot Fuzz, and in Paul they lovingly spoof the science fiction genre the way they bastardized the zombie and buddy cop genres. I wasn't disappointed. This is a movie that has no fear of showing its audience a good time. The humor is both right in front of your face and unexpected, and that is perhaps the ultimate pleasure: the laughs aren't all cheap but they aren't all from out of left field either. And the movie references don't bog the film down from having its own wildly entertaining storyline, which isn't original, but doesn't need to be. The characters and their interaction are what's original (and funny as hell).

Pegg and Frost play two British sci-fi nerds who actually meet an alien while touring the famous alleged alien sighting locales of the Western U.S. It's the kind of pastiche you're used to from these fellows: irreverently irreverent, dead-on funny. Despite the fact that they play different characters in each movie, it seems as though their relationship at its core is the same and is developed with each successive story. There's a sense in which the audience is the same, loyal audience, and they've earned the right to speak directly to them with their performances.

Every time you think the movie might be trying to go sentimental, they pull the rug out from under you and you laugh with glee that there's always a wink behind the dramatics. It's a wonderfully enjoyable movie for buffs or non-buffs, because the cast is so game and the writing so funny.

This time a wonderful cast of Americans joins them: Jason Bateman, Sigourney Weaver, Bill Hader and Joe Lo Truglio as alien-hunting government agents who are out to exploit Paul (voice of Seth Rogen), the likeable, wise-ass little green man trying to make it back home. Kristen Wiig co-stars as a fundamentalist whose experience meeting the alien rattles her faith and sets her free from the shackles of religion. Also starring John Carroll Lynch as her Bible-thumping father. Cameos by Jane Lynch and Jeffrey Tambor (and a small role by Blythe Danner at the end) round out the cast. Directed by Greg Mottola. Written by Pegg and Frost.
by Jacob Lusk @ pannedreview
Email ThisBlogThis!Share to TwitterShare to FacebookShare to Pinterest
Tags 2011, Jane Lynch, Jason Bateman, Kristen Wiig, Nick Frost, Sigourney Weaver, Simon Pegg