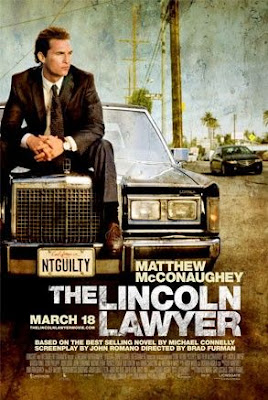 Matthew McConaughey as Michael Connelly's slick, conniving lawyer, Mickey Haller, who begins to experience a moral dilemma when he suspects his latest client is guilty. It's the closest thing I've seen lately that reminded me of a 1940s detective thriller like The Maltese Falcon or The Big Sleep. All the little threads tied together in the vein of those wonderfully dark and glossy noirs, but The Lincoln Lawyer doesn't attempt to imitate the style of film noir. Perhaps it's in tune with the crime series on television (that I rarely watch). However, it doesn't forget the qualities that make a movie a movie and not an episode from CSI.

McConaughey is always on. He does the sleazy lawyer thing well, and he gets to play a drunk and a hero and a villain, and a loving father who still socializes and sleeps with his ex-wife (Marisa Tomei), also an attorney. She's "trying to keep dirtbags off the street while he tries to set them free." We're led to believe that Mickey's ambiguous morals contributed to the divorce, but not enough to keep her from getting hot for him after she's slammed down a few beers.

Ryan Phillippe pulls off the spoiled rich boy performance that his career has led him into. I was pondering Phillippe's career and how he's doing supporting parts. I think he's good at them and, while he's too good-looking to be a character actor, he could make a pretty good living off the type of character he plays in The Lincoln Lawyer. William H. Macy also stars, as Mickey's investigator, an example of an ugly character actor who gets all kinds of wonderful and sordid movie roles.

McConaughey is a perplexing looking and acting individual. He pulls off the nuances necessary for his character: likable unlikableness. He has something a bit off-kilter in his eyes--just like Woody Harrelson--and reminds me that he started his career playing a psycho in one of the Texas Chainsaw movies. He's managed to develop that psychotic quality in his later--better--movie roles, and it works for him here. Phillippe couldn't have been as convincing in this role. We can believe he's a spoiled jerk, even a cold-blooded killer, but he doesn't have the likability, that natural mix of charm and insanity that makes McConaughey's performance really kick.

The movie delivers the plot twists, but maybe you'll figure them out before they unfold. I thought it was an enjoyably pulpy good time, with a strong supporting cast (besides the ones already mentioned, who all did good work), that also includes Josh Lucas as the prosecuting attorney who butts heads with McConaughey, Frances Fisher (as Phillippe's rich-bitch mother), John Leguizamo as a sketchy bail bondsman, Michael Pena as a former client, Bryan Cranston (he was the dentist in Seinfeld), and Laurence Mason as McConaughey's driver, probably the most stereotypical and contrived character in the movie. He's such a likable character that you wish he had more screen time.
by Jacob Lusk @ pannedreview
Email ThisBlogThis!Share to TwitterShare to FacebookShare to Pinterest
Tags 2011, Frances Fisher, Marisa Tomei, Matthew McConaughey, Ryan Phillippe, William H. Macy