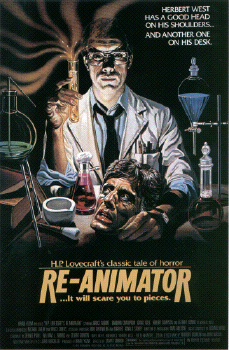 All in Good Fun: If Re-Animator (1985) isn't the goriest movie ever made, it's gotta be at least in the top ten. You've heard the story before in Frankenstein and you've seen it parodied before in Young Frankenstein, but never to this degree of unbridled insanity. It's about a pompous, eccentric med student named Herbert West (played by Jeffrey Combs), who discovers a serum that can bring the dead back to life. Trouble is, they're not really controllable, they seem to acquire inordinate amounts of strength during the reanimation process, and they're really rather cranky (and a tad ungrateful, given that they were brought back to life).

Re-Animator is director Stuart Gordon's first feature, based on the short story, Herbert West-Reanimator (1922) by horror icon H.P. Lovecraft. It makes calamity out of and jeers lovingly at the interplay between stability and instability of the human body. When West severs the head of a prominent surgeon (played by David Gale, who bears an uncanny resemblance to John Kerry) and then reanimates him, it's as though the divided body has become two selves instead of one, and so the movie makes you think, are we separate from our bodies or not? Are we our bodies or simply our brains?

It's quite a philosophical question for a movie so saturated in blood and matter, and yet this is the work of the horror genre, if the horror movie in question is worth its salt: it not only touches a nerve of whatever is freaking out the culture at that precise moment, but it pokes around at our subliminal fears and addresses them in ways we could never imagine. Somehow, there's relief to be had in this process. We've vicariously lived and died through this experience, and we come out alive knowing it was only a movie.

Re-Animator won't be the selection of the squeamish movie-goer, but it delivers a deliciously funny good time to those who can stomach its icky moments. Those gory outbursts are so over-the-top that it's hard to really be affected by them (up to a point). It's as if the viscera becomes completely artificial (the 80s make-up and special effects hold up pretty well, although there are moments when they don't quite work--CGI has similar problems too, though).

There are interesting little moments in the camera work that register well. A shot of the leading lady (Barbara Crampton) walking from the elevator to the morgue is handled with an eerie superfluousness. The camera glides backward while she walks forward but very slowly. It's a cool effect. Later, the doctor summons forth his zombie minions in the morgue, and the effect of their springing forth simultaneously from their body bags gives that moment a wonderful zing. The whole movie is fluid and alive. It's so fresh and unpretentious. Perhaps because Gordon doesn't hold back on the gore, he doesn't feel the need to withhold or delay plot information either (which we are smart enough to figure out anyway). He's an honest and an efficient director, and he plays up the campy aspects of the material nicely, too.

With Bruce Abbott as a fellow med student who becomes caught up in West's bizarre experiments, and Robert Sampson as the dean of his med school (who becomes one of Gale's shambling zombie goons).