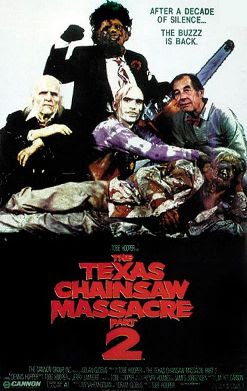 Fear of Laughter: Twelve years after he left audiences reeling with his 1974 exploitation shocker The Texas Chain Saw Massacre, Tobe Hooper returned with a sequel that tried to encapsulate the glossy, synthetic, yuppie milieu of the 80s just as its predecessor seemed to capture the 70s in documentary fashion. Tobe Hooper has an intensely kinesthetic directing style: the things going on in his movies are often too much for the camera to contain. Sometimes it seems as if the camera merely sits like a spectator while something horrendously witty and unpleasant occurs. You're often laughing just as much as you're jumping, and then you're chiding yourself for finding it so funny. But over-the-top horror is designed to be funny. It's too horrible to elicit anything but confused laughter. We're afraid of our laughter because it seems out of place, and simultaneously we're laughing because we're afraid. Few movies can achieve this, and yet I won't call The Texas Chainsaw Masssacre Part 2 a great movie, a good movie, or even a successful movie.

Frankly, it's a complete mess. It seems as though much of the action happened on the fly, and while that can frequently have promising and spontaneously happy results, much of this horror opus is experienced with a mixture of excruciating boredom and disenjoyment. We are waiting for it to be over, yet unable to look away from the pure spectacle of it all. The first half hour is the best part of the movie. Hooper opens with a really interesting scare scene involving two obnoxious frat boys driving through the Texas countryside on their way to Dallas. Their latest antic is playing "Chicken" with other cars, and as can be expected, they piss off the wrong family of backwoods cannibalistic psychopaths, and live to regret it. The whole murder scene happens while the yuppie frat boys are on the phone with a local radio station, and so the murder--apparently a grand return of the maniacal Sawyer family--is captured on the air. The deejay at the radio station replays it at the request of an equally nutty ex-Texas ranger (Dennis Hopper) who's been hunting for the Sawyer family for years (his niece and nephew were victims in the original), and of course angers the Sawyers, who make her their next target.

The scene in the radio station is genuinely creepy, capped off with a great scare moment. After meeting the crazed Vietnam Vet Chop Top (Bill Moseley), the deejay, nicknamed "Stretch" (Caroline Williams), is accosted by Leatherface, who's as mixed up as ever. After that the movie falls apart while Hooper takes us to a run-down Texas battle-themed amusement park, the new lair of the Sawyers, and attempts to repeat the unappealing scenarios of the 1974 film where the sole survivor (Marilyn Burns) became the "dinner guest" at the Sawyer's farmhouse.

The movie is full of over-acting and bizarreness, but then that's really the point. And yet, it's a fascinating subject for cultural analysis. We see the elements of a family that has completely lost touch with reality, has a paralyzing fear of the outside world and an inability to cope with the human body, dead or alive. Loss of life is countered by the preservation of family corpses in various "artistic" fashions. The Hitchhiker, killed in the first film, becomes attire, worn like a puppet to cover Leatherface's own body when he's dancing from the roof of their pickup truck attacking the yuppies with his chainsaw. The grandmother is now hoisted on a strange throne at the top of one of the amusement park "mountains." Loss of bodily function is equally problematic. Chop Top, shot in Vietnam, has a metal plate in his head and his degenerating psyche seeps out into the way he dresses and the lack of attention he pays to hygiene. I wondered if the make-up artist on Beetle Juice had him in mind when he designed Michael Keaton's face for that character. There's a remarkable similarity between Chop Top and Beetle Juice, and even the comic timing is about the same, except we feel a lot safer around Beetle Juice because that movie stays much more carefully within the limits of its genre. The macabre elements are there but the gruesomeness is deemphasized.


Tobe Hooper has always been a problematic director. Little of his work seems to be pulled off just right. I've often wanted to like the original The Texas Chainsaw Massacre, but for all its technical pleasures it's a movie that is hard to enjoy, and likewise, its sequel is only marginally entertaining. Hooper needed a good script supervisor and a better editor, perhaps, to make Part 2 a little more compact (its 100 minutes feel like 140), but then the 80 minute original felt too long too.
by Jacob Lusk @ pannedreview
Email ThisBlogThis!Share to TwitterShare to FacebookShare to Pinterest
Tags 1986, Dennis Hopper, Tobe Hooper