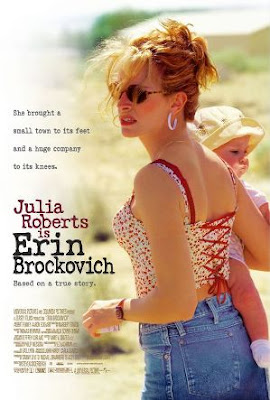 Seeing Between the Lines. Movies that are "based on a true story" should never be evaluated for their historical accuracy, but as narrative, fictional accounts with a whimsical attachment to an event which happened to take place in real life. We've seen this to be true with the reaction to The Social Network, as people portrayed in the movie have come out and said that much of it was a fabrication on the part of the writer and the director. We may never get to the truth with all the angles confronting us incessantly, so as moviegoers and critics we ought to consider the importance of the movie and not the event that studios are capitalizing on in an effort to generate more revenue. "Based on a true story" is, after all, nothing more than a marketing ploy.

With that out of the way, I want to take a look back at Erin Brockovich (2000), the movie that gave Julia Roberts an Oscar for her performance as an abrasive single mother who used her looks and her gutsy personality to take aim at a corrupt corporation. Apparently, PG&E was poisoning the wells of a small town and lying to the residents about it, and only a woman who'd been on the short of end of the stick as many times as Erin Brockovich could do them justice. She corners a lawyer named Ed Masri (Albert Finney) into giving her a job after he fails to deliver for her in court. Erin is the epitome of the down-on-her-luck American single mother who has a perfect figure and an unshakably tenacious spirit. The movie is perhaps ludicrous, but Julia Roberts's performance is so much fun you can hardly fault it.

In 2000, critics were mourning the death of American Cinema. They do that a lot. I've done it too. Erin Brockovich isn't the type of movie that typically attracts Academy Award attention, but if memory serves, it seemed like people were pulling for Roberts because this was the best role she might ever get, or rather, the most important role she might ever get. It was more important if not pop-culturally less significant than Pretty Woman, and far more memorable than just about anything she'd done in the 10 years between that film and this one.

And indeed, director Steven Soderbergh and screenwriter Susannah Grant have fashioned an entertaining movie. It has a noirish feel to it that inflates the mystery/thriller/courtroom drama aspects of the plot (it is really none of these genres but it seems that Soderbergh wanted to lend that kind of feel to the movie as a means of maintaining the audience's interest). Erin Brockovich is a good movie, a finely crafted piece of entertainment, and yet it's incredibly calculated. Every emotional reaction has been anticipated by the makers. There's a repetitive buildup where Erin encounters crummy, sleazy, or even ignoble characters and then unleashes her witty, profanity-laced speechifying upon them, and then they generally back down meekly--shocked into coercion by the high-heel-adorned hooker from Pretty Woman with an infant clutched under one arm and sunglasses perched over a nest of thick auburn hair. Her entire demeanor seems to say, "watch out...beauty, brains and bad-ass travel in these shoes, and you will be stepped on."

But in the intervals, when Roberts is reacting to what's going onscreen, you wonder if there's really anything beneath Erin Brockovich. It's a movie that has a richly layered crust but nothing inside at its core but gushy emotionalism. We have clear-cut villains (evil corporate executives in business suits...one of whom reminds you of Mark Zuckerberg in his youthful awkwardness) and clear-cut victims (moms and kids who have been ravaged by poisonous, cancer-causing water), and a heroine who will cut the balls off anyone in her way. Of course it's a fun and enticing mythology, but you wish that beneath the surface there was an underlying richness to which the exterior could have been fastened, pinned down as though a real and truly organic tale was unfolding.

Perhaps this is harping, but it's worth considering, especially for movies that flaunt their "based on a true story" subject matter. This one made the real Erin Brockovich a star, and made its star an Oscar-winner, but does seeing beneath the lines make everything else seem hollow and cheap?