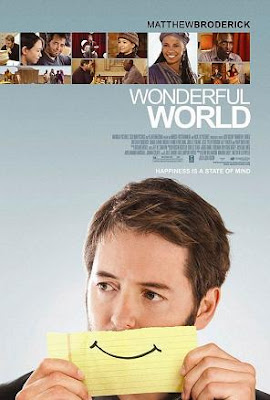 Wonderful World is a movie about a man named Ben Singer (Matthew Broderick) who's really cynical and expects disappointment and negativity at every turn. Apparently he didn't always view the world this way, but then he got divorced and felt himself becoming alienated from his daughter and bored with his copywriting job (not to mention irritated at the perceived level of idealism of those around him). His only real glimmer of hope is his roommate, Ibou (Michael K. Williams), an African immigrant who goes into a diabetic coma early in the film, initiating Ben's journey down the road of not being such a grumpy pessimist. He meets Ibou's sister when she comes from Africa, and they enjoy a little romantic relationship while they're waiting for Ibou to wake up. It's The Accidental Tourist all over again, except they've replaced flakiness with foreignness. Sanaa Lathan, as the sister, is quite beautiful, and she has a natural warmth about her that makes her character really rather charming.

Matthew Broderick seems to gravitate toward parts where he's a perpetual loser. His pasty, frowning demeanor served him well in movies like Election and You Can Count On Me. In Wonderful World, there are moments when you wonder why on earth you're supposed to care about this schmuck, but his supreme annoyance with the world is somewhat understandable, and he's very believable as a grump. He just can't connect, but he's reawakened by African exoticism and values. Perhaps it's a bit much to believe, but okay.

Wonderful World has a remarkable slightness about it, although you feel compelled to watch anyway, if only to see what becomes of Ben. There's such an inclination that he will dig his own grave and bury himself too, and there's an inkling of belief that in fact Ben gets a kick out of being kicked when he's down. When he gets fired, he's forced to take a job as a pizza delivery man. He faces an uncomfortable moment when he delivers dinner to his former boss (William Ragsdale), who doesn't even seem to recognize him. It's humiliating and degrading, but even more it's a victory for Ben, confirming all of his worst notions about human nature. He's a man in search of such victories, and it's all too easy for him to discover them. He tries to sue the city for neglecting his roommate Ibou--another such search for confirmation that the world is vile and heartless. We're told that, yes, the world is heartless, but we shouldn't give up the ghost so easily. We should put on a happy face regardless and make the best of things.

It's a bit of a Hallmark message for a movie that wants so desperately to be an "indie" drama. Broderick's character, in one of his rants, makes an interesting comment about movies that they're only valued by how much money they make. Indeed, this little film has gotten virtually no notice by critics or audiences, and I think it deserves to be seen. Not because it's a great movie, but because it's interesting. Even as flawed as it is, it was more affecting than most of the high-grade junk that's produced from the studios. It's light even when it's heavy, and it's charming even as it reproduces scenes from other movies we've seen a million times. The movie is downright repetitive at times, but we're pulled into its games rather easily.

With Phillip Baker Hall, as the Man, who keeps turning up in Ben's dreams and marijuana-induced hallucinations. Written and directed by Joshua Goldin.
by Jacob Lusk @ pannedreview
Email ThisBlogThis!Share to TwitterShare to FacebookShare to Pinterest
Tags 2010, Matthew Broderick