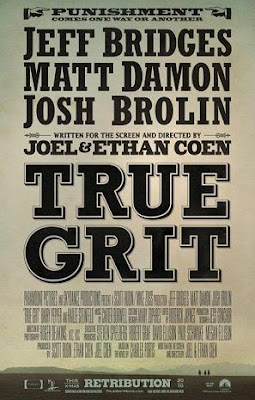 A plucky fourteen-year-old girl--who looks like Anne of Green Gables with brown hair--nags a grizzled old marshal into hunting down the man who killed her father in cold blood. Jeff Bridges takes Rooster Cogburn (the part that garnered John Wayne his only Oscar for the 1969 version of True Grit) and turns him into a comical force to be reckoned with. He banters back and forth with Matt Damon, who plays a Texas ranger who's hunting the killer for a different murder. You can tell Bridges was having fun with his part, and Damon's natural likableness comes through in his role even after a scene where he repeatedly welts the pesky little girl for her stubborn refusal to let them take care of her vengeance. She's determined to see justice served.

The Coen Brothers never fail to let the brutality of their characters come through. They seem to have a morbid fascination with bodily disfigurement, as I recall the knife in M. Emmett Walsh's gloved hand in Blood Simple. It's not just that he gets stabbed. Frances McDormand plunges it into his hand while he's stretching his arm out of one window and into another, so that he's stuck in that position in excruciating pain, and as sleazy as his character is, the audience groans in agony right there with him. In No Country For Old Men, we squirmed in our seats as Javier Bardem repeatedly dealt his own sadistic brand of "justice" with that strange oxygen tank device, which left little holes in people's foreheads. In True Grit, it's like the Greatest Hits of Movie Disfigurement. Hands stabbed, chests stabbed, eyes pecked out by birds, a tongue bit through, teeth yanked out with abandon, serpents nesting in a rotting corpse. There's a scene of a hanging early on in the movie, and we see the brutality of execution matched by the creepy fascination of the spectators who've come to it like it's a carnival show. The audience watches as the man in the middle makes a pathetic speech about being raised improperly and pleads for mercy with tears streaming down his face, and then has his head covered by one of those black sacks. When the native American on his right is about to speak, the executioner simply pulls the sack over his head and he's denied even the slightest bit of dignity.

It's like a Western mixed with Grand Guignol, and yet there's a consistent thread of humor that topples the brutality over like a heavy statue on loose, grainy soil. One minute we're absolutely frantic with the grotesque horror of it, the next we're laughing because Bridges is giving Matt Damon shit about being a Texas ranger who mounts sheep instead of horses or one of a hundred funny zingers that he slings at Damon's character (and vice versa).

As the girl, Hailee Steinfeld pulls off the difficult task of being the emotional heart of the picture. Her naive idealism and her stick-to-itiveness is charming even when the cynical reality is evident in the facial expressions and the words of the men. Josh Brolin plays Tom Chaney, the man who killed her father, and his entrance into the story is well-timed because it is so unexpected. He's totally scummy, an interesting change from his last Coen Brothers movie, where he was the hero we rooted for (even though he was an idiot at times).

The suspenseful scenes are well-crafted. They tug at our emotions and heighten our senses in a calculated sort of way, and the directors seem to have everything carefully in place emotionally speaking. The images are pretty--there's a lovely shot of the girl as an adult (Elizabeth Marvel, who also narrates) walking away from a field and her black silhouette is set against the sky. It's striking even if it's a deliberately cinematic shot. The opening shot is the gradual reveal of a clapboard house at night that's glowing from the oil lamps inside. It's very beautiful, and it captures the rustic image the directors were going for with this.
by Jacob Lusk @ pannedreview
Email ThisBlogThis!Share to TwitterShare to FacebookShare to Pinterest
Tags 2010, Jeff Bridges, Joel and Ethan Coen, Josh Brolin, Matt Damon