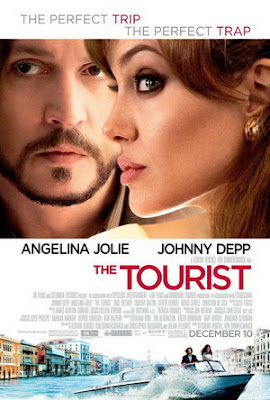 The Tourist is an American remake of the French film Anthony Zimmer (2005). It stars Angelina Jolie as a British woman who meets an American tourist (Johnny Depp) while on a train from Paris. Depp's character, a banal, unwitting math teacher from Wisconsin, becomes the fall guy in Jolie's plan to help her lover, a career criminal named Alexander Pearce, escape from both Scotland Yard and a greedy gangster (Steven Berkoff) from whom Pearce stole around 800 million dollars. It's a simple adventure story, botched by three writers (Christopher McQuarrie, Julian Fellowes, and director Florian Henckel von Donnersmarck) who don't seem to know what they're doing or how to make a good romantic adventure pop with suspense and charm. They don't seem interested in giving us a good time so much as filling time. Perhaps the writers were just sloppy in their construction of the story, or perhaps they merely translated a sloppily constructed story from French into English. Either way, what you have is a movie that is entertaining for a while until you start to think through it and become frustrated with the laziness with which it was all thought out.

Some random Scotland Yard agent is apparently an informant to the gangster mentioned earlier: he leaks the information about the man Jolie claims is Pearce (but is really the schoolteacher played by Depp). The movie rests on this little mishap and on the incompetence of another Scotland Yard agent, played by Paul Bettany, who keeps botching operations because he fails to do his homework thoroughly. At the climactic scene where the gangster is about to kill Jolie and Depp, it is this agent who refuses to let his men fire on the gangster and his goons because he's waiting for Pearce to show up. When Bettany's superior (Timothy Dalton) miraculously arrives on the scene, he orders them to fire on the villains, and the heroes are saved by a modern-day deus ex machina.


The Tourist reminded me of several movies. It seemed a little reminiscent of Charade and even North By Northwest, and more recently of another Angelina Jolie movie, Salt, and Knight and Day (also from 2010) which starred Tom Cruise and Cameron Diaz. That movie was mindless but more engaging because the stars were I think a bit more relaxed. Jolie seems as inaccessible as ever with her cynical, exotic version of Audrey Hepburn-esque elegance. While I can totally buy their being a romantic pair, the movie doesn't give us enough of them together where they're actually able to fall in love with each other. In the end we discover why this seemed unnecessary to the writers, but until that time it's just bad writing and even worse disinterested writing. They didn't bother with a better script, possibly because they knew it would be Angelina Jolie and Johnny Depp playing the parts. Depp is so reserved that you wish some of the magnetism of which he's capable would shine through, but he's forced into playing the inept, charmingly clumsy American tourist, so he's likable but boring. He becomes a puppy following Jolie's character around out of blind love. The movie is passably entertaining, but you long for so much more than that, and it becomes quite a disappointment in the end.

There were things I liked about The Tourist, however. There's a lightness to the movie that is much appreciated in an era when most filmmakers' approach to subtlety involves a megaphone and a sledgehammer. The simplicity of Depp's motivation is perhaps what drives his charm. As far as we know he's been deeply hurt before, and it's like he's a lost soul wandering through the city of love. Jolie's character, on the other hand, is ambiguous. We wonder what she's really up to, and her duplicitous behavior is the right contrast to Depp's character. The movie tried to use its Venice locale well, particularly during an exciting boat chase where Depp's character is handcuffed to the railing of one boat, and Jolie is rescuing him from Berkoff's goons. It's a marvelously well-done scene. I think it outshined the finale, which should have been even more exciting given the build-up with the chase scenes in the middle of the movie. It's the writing that messes everything up. The star appeal and the basic elements of the plot are alligned for a better movie than is given to us in the end.
by Jacob Lusk @ pannedreview
Email ThisBlogThis!Share to TwitterShare to FacebookShare to Pinterest
Tags 2010, Angelina Jolie, Johnny Depp