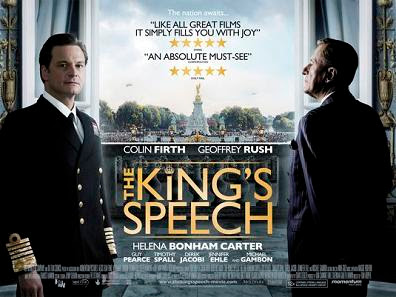 My expectations going into The King's Speech were low. It looked like Oscar-bait. It looked like a lot of scenes of Colin Firth making animalistic stammering noises to show us how painfully he struggled to improve his speech. While the movie had moments where it seemed to be aiming for an Oscar, the story it told was fascinating, and didn't need to be elevated into awards material. It's about British royalty, particularly British royalty in the 1930s, and so what it needed was to be taken down a few notches. Geoffrey Rush gives the movie this necessary derailing. He plays Lionel Logue, a speech therapist to whom the Duke of York (soon to be King George VI) goes for help with his impediment. Lionel is not impressed with the pomp of George's royal status and doesn't afford the future king any extraneous privileges.

Firth is somber looking in another tasteful performance (he was very somber and tasteful in 2009's A Single Man, as an English professor), but he manages to break through the clinched veneer of his character to let a little humor and a lot of vulnerability into his performance. As his wife, a young Queen Mother, Helena Bonham Carter has such a high amount of potential within her as an actress. You can sense the wit she carries inside herself as it comes through in little movements, facial expressions, and in the way she carries herself. It's quite fun watching her leading her husband around like a shepherd with one of his sheep, and yet never overtaking his station. She's quite lovely, and quite an intelligent, fiery actress. Watching her keep that fieriness in check is fascinating because she seems to be in such command of her performance.

The movie cannot resist giving us a bit of the World War II treatment, tapping into the tension that was stirring in Europe in the 1930s. Of course it's obvious that England needed a king who could get his way through a sentence without stammering incoherently, especially during a time of war, so WW2 gives the story weight and significance. After all, why are we to care about a privileged royal son's speech problems? Surely the sympathy belongs to the underlings of the empire who cannot afford the luxury of a speech therapist. Surely we are better off caring for Rush's middle class dwelling and his middle class family. And yet the Logues are never portrayed as greedy, pining opportunists trying to glom onto the king's prestige. They are content with who they are much more so than the king himself. There's a scene when the radio carries the news of impending war, and you get a sense of the fear in their faces that one or both of their sons may be summoned to fight for the Crown.

Colin Firth may get the bulk of the award recognition for this picture (and he is good here), but I believe it is Geoffrey Rush who carries The King's Speech, and Helena Bonham Carter as well. Their performances were among the highlights of the movie. The cinematography of Danny Cohen was another. At first I groaned because I was afraid the murkiness of the exteriors--London is known for its rainy, foggy days--would make the movie a dull, depressing drag. But Cohen manages to make it visually interesting and gives the material a fluidity that it desperately needs. You can't squeeze much juice out of crusty upper-class British drama without a little help, and it's partly to the cinematographer's credit that The King's Speech is so watchable. It's not only watchable, it's quite funny, with a particularly amusing scene of the king shouting profanities at the top of his lungs as a vocal exercise.