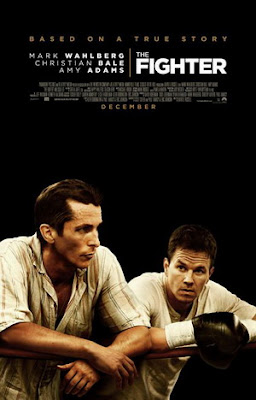 For me, boxing is about as uninteresting as good taste is to Kathy Griffin. I liked Cinderella Man but it's such a bland subject to me that much more is needed than the back and forth of the two prizefighters and the ever popular theme of an underdog triumphing over insurmountable odds. Apparently entire cities of people can rally behind a boxer as though he's a symbol of all their hard work, blood, sweat, values, etc., but how many times do we have to sit through a movie that's made of such subject matter before we're asleep with boredom? Director David O. Russell makes The Fighter less about boxing and more about the family of sleazy, opportunistic worms and their selfish investment in the career of son/brother Micky Ward, whose brother Dick had his time in the limelight in the 1970s against a fighter named Sugar Ray. Dick is now a crack addict, and the addiction keeps pulling him apart from his brother as both a friend and a trainer and mentor. Nevertheless, Dick's mom Alice, who manages Micky's boxing career, is blinded by Dick's past glory and is convinced that he's necessary to Micky's success. She's waiting for Dick to make his big comeback, and biding her time with Micky's boxing campaign. They're thrilled that HBO is doing a documentary on Dick until they discover it's a documentary about the horrors of cocaine addiction.

As Micky, Mark Wahlberg does a formidable job playing the emotional center of the movie. Wahlberg will probably not get the recognition he deserves for initiating The Fighter and for his performance, but he's quite good. The problem is he's not really playing anything new for himself as an actor. He's basically a nice guy. We feel confident that he can do what is needed to win, and we trust Wahlberg as an actor to carry the film. Christian Bale, as Dick, has the more extreme character. His glassy-eyed stares and wobbling swagger make him seem a bit nightmarish--he's trying to show us the ravages of addiction and in the process becomes something increasingly hideous. I wasn't even particularly sympathetic towards him. He seemed like a leech sucking away his younger brother's potential, urged on by the Mama Leach, Alice (Melissa Leo), whose part is probably the most delicious one in the movie (along with the parts of her seven dried-up, spaced-out daughters, who do pretty much whatever Mama tells them).

This is probably one of the funniest movies of the year. Russell gives us such a bleakly comic look at this royally f***ed up family that it has the effect of watching an episode of Jersey Shore. They revel in the gutter as though it were lined with satin and roses, and their opportunism is so unveiled that you can't help but laugh at their efforts to protect their turgid family unit from outside invasion. Amy Adams, as Micky's girlfriend, represents the first real threat to the family's shell. She sees how much they're ruining Micky's chances to really succeed as a prizefighter, and she has the audacity to stand up to their "us verses the world" act.

The relationship between Dick and Micky is truly what drives the film's story. Without Micky's fear of letting go of his brother--of essentially betraying him by realizing how destructive Dick is to Micky's career and his life--he could easily move on to brighter pastures and recognize his potential. However, it's not as simple as Dick being a useless leach. He's got instincts that can't be ignored when it comes to boxing, and Micky realizes that he does still need his brother's help. Perhaps the dramatic tension is a bit predictable, but the movie's comic realism helps to lighten the load of the drama. We're already enjoying the juicy scenes of the family in-fighting more than the boxing anyway.

Overall I'd say The Fighter exceeded my expectations because it went so much against the grind of the typical boxing movie, and I was very thankful that David Russell and everyone else involved in making the movie took the care to be funny and realistic in their approach. With Jack McGee and Frank Renzulli. Written by Scott Silver, Paul Tamasy, and Eric Johnson.
by Jacob Lusk @ pannedreview
Email ThisBlogThis!Share to TwitterShare to FacebookShare to Pinterest
Tags 2010, Amy Adams, Christian Bale, David O. Russell, Mark Wahlberg, Melissa Leo

I'm glad I read this because I really wanted to see that movie for the boxing. It makes me sad that you don't like boxing but maybe it's because you've never seen a good fight. Thanks for writing such good reviews. I get a little lost with all the references but I enjoyed reading your blog.