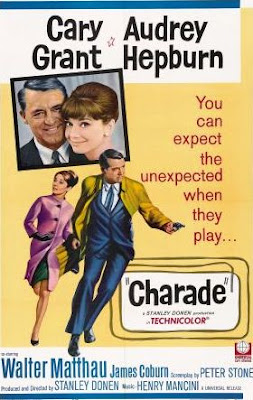 Cary Grant was 59 when he played opposite Audrey Hepburn (25 years his junior) in Charade, but his age isn't as much of a hindrance as you'd think. He's still able to pull off the image of a suave leading man (he'd also done remarkably well four years earlier in North By Northwest). He plays a stranger who comes to the rescue of a young widow in Paris (Hepburn) whose husband was the target of three ruthless goons (James Coburn, George Kennedy, and Ned Glass) who are after 250,000 dollars that he swindled them out of. Her husband is murdered (and his body thrown from a train) before the opening credits, and so Hepburn becomes the central focus of the goons' continued quest for the elusive money. (They're cartoonish and yet menacing, like sociopathic Coyotes and Audrey is the Road Runner.)

Charade is like a vacation from the stodginess of Audrey Hepburn's other movies that seem to hoist her on a pedastal like Galatea (Roman Holiday, Breakfast at Tiffany's, Sabrina and then later My Fair Lady). She's at her best when she's allowed to be fun and intelligent, but also accessible. She's always one-upping Cary Grant, but she's never too good for him. She's wholesome without being a prude, and she's game enough for the fun of this movie, which is set completely in Paris. The city becomes a labyrinth for us to try and find our way out of, but once we become engrossed in the movie we're hard-pressed to want to leave.

Along with the comic suspense that makes Charade so engaging is Henry Mancini's music score. Mancini's music is positively creepy (it's so slick and sophisticated and yet incredibly menacing) when it comes to thrillers. So many early thrillers didn't get the music right. It was as though the composers were told to de-emphasize the terror and the suspense, so their music takes a frightening or exciting scene and turns it into sentimental corn. Mancini, on the other hand, isn't afraid to take the material and run with it. His work on Experiment in Terror and Wait Until Dark is fantastically freaky, and in Charade  he captures something of the allure and the magic of Paris and Audrey Hepburn and Cary Grant and of the entire genre itself, and for that Charade is a better movie. It's the loveliest kind of trashy entertainment, and ironically enough it was not a hit when first released.