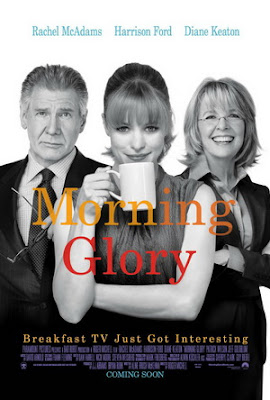 I'm sure that in retrospect the studio executives behind Morning Glory regret releasing it so close to the premiere of the latest Harry Potter installment. Morning Glory is slight and episodic, light and fluffy entertainment that doesn't have much umph to it: Rachel McAdams plays Becky Fuller, an endlessly energetic but naive young producer who is handed the task of salvaging Daybreak, a morning talk show that no one watches.

It's sort of about how McAdams's character grows from being a career-obsessed single woman to a more well-rounded, on top of the game, mature woman who's willing to let a little romance (provided by Patrick Wilson) into her life. It's also sort of about her struggle with a grizzled, iconic anchorman (Harrison Ford, looking as lively as a corpse) who is forced to co-host Daybreak much to his chagrin. Ford's character, named Mike Pomeroy, feels that such trivial subject matter is beneath him, while his co-host (played by a marvelously funny Diane Keaton, who's given less than she deserves but does wonders with it) revels in seeing the beloved newsman taken down a notch.

McAdams has a very likable quality that sustains an uninteresting character. She's Mary Richards without the gutsy spunk that made her character grow from timid to tough. She's not sassy enough to be Murphy Brown, and she doesn't have the nerdy humanness of a Liz Lemon. (Notice that all these characters come from television.) I don't think we'd care a wit about Becky Fuller if someone less charming and sympathetic and likably idealistic were playing her. But McAdams pulls it off at least to a point, and we're willing to root for her, but the movie doesn't really give us much to root for. Becky's dream of being offered a job at NBC on The Today Show will clearly have to be sacrificed so that she can preserve the familial quality she facilitates when she takes over Daybreak, but there's so much squabbling and chaos between the crew and the personalities on the set that we never really see that growth: it's all bombastic lunacy fueled by angry jibes at each other until suddenly they're this big, warm, oozing family that needs each other and can't bear to part with each other, but the movie doesn't really bridge the gap between these two points. Call it laziness or a lack of focus on the part of the writers.

This is the kind of movie we go to to see good actors climb into juicy characters and take pot shots at each other. We get that to some degree, but Morning Glory never makes up its mind: is it a cute, romantic working comedy or something leaner and smarter or something preachier? It dabbles on all sides, and so the result, while passably entertaining and at times laugh-out-loud funny, is mixed, if not uneven. Jeff Goldblum does some wonderfully funny work as Becky's boss--he's got such a good deadpan delivery that you enjoy his character ragging on Becky -- it gives her something to fight against. Keaton and Ford have some enjoyable tension but it's like a less intense version of Walter Mathau and Jack Lemon squabbling and hurling insults at each other in Grumpy Old Men. ★★½
by Jacob Lusk @ pannedreview
Email ThisBlogThis!Share to TwitterShare to FacebookShare to Pinterest
Tags 2010, Diane Keaton, Harrison Ford, Jeff Goldblum, Patrick Wilson, Rachel McAdams