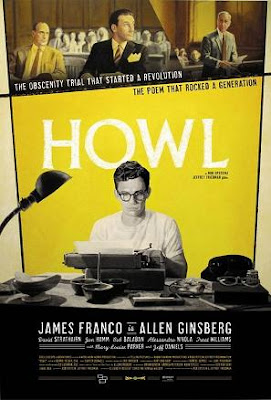 I like James Franco because he makes interesting career choices. I won't say his choice to do General Hospital last year was daring, or provocative, or interesting, but it's refreshing to see an actor doing what he wants to do. On the other hand, Franco's newest movie, Howl, is kind of daring. Howl is about Allen Ginsberg and his phantasmagorical poem ("Howl"), which was accused of being obscene.

The movie traces the trial in which David Strathairn and Jon Hamm face off as lawyers on opposite sides of the case, while a cartoonish-looking Bob Balaban sits sternly at the bench with his gavel. Interspersed with the courtroom drama story, which is the most mainstream thing about Howl, are scenes of Franco as Ginsberg, being interviewed by an unknown person, talking about his writing style, his thoughts on art and the creative process, his homosexuality, his relationships, and his mother, who died after she underwent a lobotomy.

The standout in Howl is the animation: a visual representation of Ginsberg's poem, which is the third part of Howl's intercutting story. It's vividly mad and madly vivid, a fascinating realization of Ginsberg's rambling, chaotic, sensual style. Such an ambitious attempt at uniting poetry and film makes Howl worth seeing, although it's probably not going to find much of an audience. It's more of a documentary than a piece of narrative, and the courtroom drama section of the movie is, despite being the most traditionally dramatic aspect of the movie, not the emotional center of the film. Is it an attempt to ingratiate the movie's form with mainstream audiences? I'm not sure, but I think it does provide a bit of respite from the trippy animated scenes and the scenes where Ginsberg talks to the camera like it's his shrink. Franco has a sort of droll, blase way of reading the poem (and speaking in general) that is charged with an energy that comes from his chest and seems to force its way out of him. His voice is a strange combination of lethargy and passion: he's like a stoner who's simultaneously mellow and unhinged.

Jon Hamm and David Strathairn don't really have much to do other than defend their side of the "obscenity in literature" argument, and while they are good actors who do convincing work, it's not very challenging work. Hamm is easy to like, so of course it's not hard to put him on the side of open-mindedness, and Strathairn does a good job playing the stuffy, wormy conservative villain who wants to outlaw what he doesn't understand. The judge's decision isn't really very momentous, but then we're left with the impression that this was never the point of Howl. Instead, it seems more an attempt to give a voice to someone who had trouble being understood but struck a chord with his incoherency. Ginsberg's poetry has been compared to jazz in its rhythm and its style, and indeed it seems like linguistic jazz--seemingly unstructured and unpredictable, going against the rules of form and style, but penetrating the senses with its dark, deep and fluid imagery.