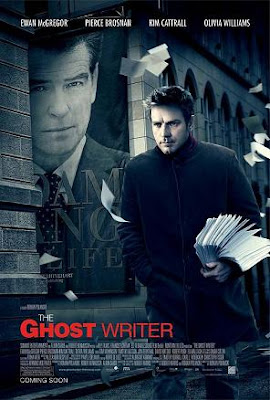 Director Roman Polanski's The Ghost Writer is a mystery yarn of the spell-binding variety, in which Ewan McGregor plays a ghost writer who is hired to finish the memoirs of a former British prime minister named Adam Lang (Pierce Brosnan). Lang's last ghost writer died of an apparent suicide while working on the book. Meanwhile, Lang is being investigated by the British government for war crimes. (He allegedly authorized the torturing of terror suspects). McGregor becomes immersed in the mystery just like his predecessor, bringing us along for the ride.

This is by far the most enjoyable movie I have seen in 2010 (or rather, it's tied with Robin Hood and The Social Network and Easy A). It's a sharp and tingling political thriller with a subtle sense of humor that keeps it from being unpleasant. Polanski's artistic touch is here too. There's a wonderful seen at the end where McGregor hands an incriminating note to another character at a large gathering, and it passes hands about twelve times as it goes from him through the crowd to the recipient.

McGregor does a nice job in this, and it's a really first-rate movie, a liberal's political thriller. Viewers to the right will likely think Lang was just doing his job, but the movie attempts to ruffle our political outrage while keeping us on the edge of our seats. Tom Wilkinson has a nice and ominous part as one of the heavies, a shady academic with ties to the former PM--he has some wonderful double entendres (his presence is always a trifle menacing and severe) that add to the tension of the movie.

Just about everything in The Ghost Writer is subtle. The movie develops in layers. We get glimpses of the tense relationship between Lang and his wife, Ruth (Olivia Williams) and the underlings (including his personal assistant/mistress, played by Kim Cattrall) who work for him at his home on a private island off the coast of Massachusetts. Lang, as we come to learn, acted in the favor of the U.S. on numerous occasions in his political decision-making. (The only non-subtlety in this movie is that Lang is a stand-in for Tony Blair).

There's certainly something to comparing this movie to Hitchcock. It has an unnamed double, like the second Mrs. De Winter in Rebecca, and it has a bit of the everyman-on-the-lam theme that fueled North By Northwest among other Hitchcock movies. However, The Ghost Writer doesn't operate like a hacky imitation of another director's work. (Polanski doesn't have to do such things, after all). It's a movie that taps in quite successfully to the political, technological and thematic current of the early 21st century. The movies are starting to integrate the tech-savvy habits of humans with less awkwardness, although it's still a bit strange seeing McGregor's character doing research on Google. It almost takes you out of the picture for a moment (not to mention the fact that he finds exactly what he's looking for, which is so improbable).

Also worth mentioning is the lovely score by Alexandre Desplat--it reminded me of Bernard Herrmann's score in that trashy De Palma thriller Sisters (1973). The xylophone dances on top of the suspense scenes with an intriguing boldness. It somehow manages to both lighten the mood and drive the film's organic sense of mystery and intrigue.