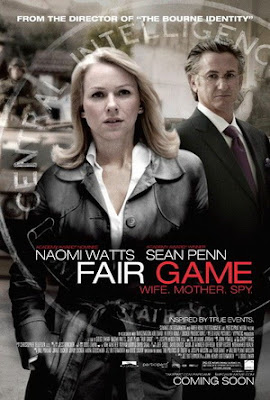 Fair Game is a political expose first and a movie second. It's a documentary thinly masked as narrative, and director/cinematographer Doug Liman doesn't seem too care in which form the viewer receives his film as far as that goes. He does seem rather concerned with the image of his main characters. How does one evaluate a movie that's so politically charged? It deals with Valerie Plame, a CIA agent whose identity was outed in a column by writer Robert Novak in 2003. The issue was Joe Wilson, Plame's husband, who claimed to know for a fact that Iraq did not purchase uranium from Niger. And of course that all has much to do with whether or not Hussein had WMD's. Since Wilson's article, "What I Didn't Find In Africa" threw suspicion on the President's campaign against Hussein, conflict arose. In an effort to stop Wilson, his wife, Plame, became a target of Vice Presidential aid Lewis "Scooter" Libby.

If it sounds complicated, that's because it is. And the movie is based on books by both Plame and Wilson--drastically different from the way the media reported the scandal, often referred to as "Plamegate." In the lead role, Naomi Watts is surefooted and strong and poised and noble. She's accused by the media of being a nothing desk agent who stunk at her job, and she takes it all in stride while her blowhard husband (played effectively with that lovable loose cannon Sean Penn) whores himself out to the media in an effort to fight back. Whether you believe in Valerie Plame the Sacrificial Lamb or Valerie Plame the Incompetent depends very much on how much homework you've done outside of the film.

As entertainment, Fair Game is at its best when it deals with the story of an Iraqi doctor (played by Liraz Charhi), who is tapped by the U.S. to funnel information from her brother, a high-ranking scientist working directly under the Iraqi government.  Plame is spearheading the operative to get this information--using Charhi's character as a tool--and the whole deal goes bad when Plame is revealed as a CIA agent. That portion of the story is abruptly dismembered from the rest of the movie (perhaps this is in line with the real events, but it's frustrating regardless). The politics of war run deeply through the movie, and it's difficult to divorce such a vital strand from Plame's story of inner-torment as she copes with her worlds (marriage, career and social relationships) careening out of control.

There's a lot of real news footage in Fair Game that further takes us out of the narrative and into the documentary. Actors playing political officials like Libby and Fleischer and Rove cannot compete with the real footage of Bush and Cheney and Rice, et. al. It's fascinating, but you wonder why Liman didn't just go straight for a documentary format. Maybe he's hoping to collect some Oscars on his mantel (the Academy does love important work, and Fair Game reeks of importance). Watts may even land herself an Oscar, although Penn's bombastic performance is the one that really leaves you on edge. He's positively frightening in one turbulent scene after another, and when he's not losing his temper, he's a live wire waiting to do so, grinning like a prophet and a politician roled into one.

Liman's camerawork, by the way, is more than a little dizzying at times. Perhaps he was trying to create camerawork that was as fuzzy and convoluted and headache-inducing as this whole scandal.