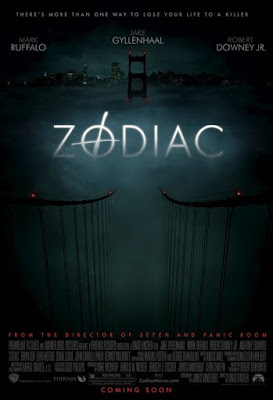 With Halloween nearing, I thought it appropriate to revisit a movie that's particularly chilling this time of year, the David Fincher-directed Zodiac (2007), which I think is one of the finest movies of its decade. Fincher is perhaps better known for directing the grisly thriller Seven (1995) and more recently The Social Network.

Zodiac is based on the book by Robert Graysmith, a cartoonist at the San Francisco Chronicle who's there when the first letter from the Zodiac, a serial killer who first struck in the Bay area in the late 1960s, arrives, confessing to a recent murder and to a double murder from a year earlier, and taunting the press and the police with a bizarre cipher revealing some important but ambiguous information about the killer's identity.

Fincher doesn't present the movie as a prying look into the deranged mind of a serial killer. Instead, the movie taps into the fascination of the public with true crime stories. Graysmith (played by Jake Gyllenhaal) becomes obsessed with the case to the point of losing his job and alienating his family. Likewise, a reporter named Paul Avery (Robert Downey, Jr.) languishes in a life of drugs and boozing after he is unable to figure out the identity of the killer (who begins sending him ominous letters--including a Halloween card containing bloody cloth from one of the victims-- after Avery suggests in an article that the Zodiac is a "latent homosexual").

One of the things that struck me about the Zodiac movie when I first saw it was the way it so meticulously recreates the look and feel of 1960's San Francisco--or at least, the way I imagine San Francisco looked in the late 1960s. (Not having been alive or in San Francisco at the time, I suppose I'm not the most qualified judge of Fincher's skill at period detail).

Watching it again, it began to register how much the movie focuses on the horror of obsession over the horror of the crimes. The crimes are displayed fairly prominently in the first hour, but Fincher doesn't revel in the violence. The editing and the lighting make it look real without the need for plunging knives and exit wounds--and our minds do the rest. We imagine the horror and pain of the victims, and it in turn horrifies us.

But there were a number of crimes the Zodiac confessed to that he didn't do (likely, more than the ones he did commit). The red herrings are in fact equally as creepy. (Gyllenhaal winds up in the home of a possible Zodiac suspect, and it's the most chilling moment in the movie). Mark Ruffalo, a San Francisco cop who's trying to solve one of the murders, is equally caught up in the sensationalism of the crimes, until he too is burned out by the labyrinthine angles and clues and possibilities and the bureaucratic miscommunication between multiple police departments.

At the end we have a movie that taints us with the fascination of the Zodiac--we are left with the elusiveness of the story, and we have shared in the obsession of the main characters. It's a terrific movie, and one I'm always eager to revisit. ★★★★
by Jacob Lusk @ pannedreview
Email ThisBlogThis!Share to TwitterShare to FacebookShare to Pinterest
Tags 2007, Anthony Edwards, Chloe Sevigny, Clea DuVall, David Fincher, Elias Koteas, Jake Gyllenhaal, Mark Ruffalo, Robert Downey Jr