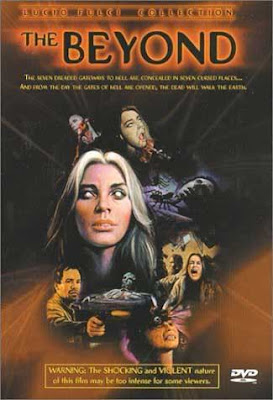 Last night I went to the Five Points Horror Movie Fest and saw Lucio Fulci's 1980 shocker The Beyond. My familiarity with Fulci's body of work extends only to his 1979 walking dead flick, Zombie, which was marketed as a sequel to George Romero's Dawn of the Dead in Europe (Dawn was released to European audiences under the title Zombi, and so Fulci's film was appropriately titled Zombi 2, although it has no real connection to the Romero film aside from the common bond of zombies walking the earth).

I knew from my viewing of Zombie that I was in for two things: lots of gore and very little logic. The Beyond delivered these in spades: it's set in Louisiana where a New York woman (Katharine MacColl) inherits a creaky old hotel that apparently serves as one of the seven gateways of Hell. Such a foreboding curse should be enough reason to vacate the premises, but MacColl's feeble-minded character seems intent on staying, despite some strange deaths that occur rather soon after her arrival.

Fulci and his technicians aren't big on subtle horror: everything is glaring and pulsating from the synthesizers to the the oodles of blood and gore. The movie fetishizes violence and dismemberment (particularly to human faces and eyes even more particularly), and the camera seems like a vehicle through which Fulci can revel in the ecstasy of shock.

The drunk guy sitting behind me actually bolstered my enjoyment of the movie. Most of us in the audience were laughing at it, shaking our heads, making comments to friends about the idiocy of the whole spectacle. However, the guy sitting a few seats to my left --adorned in a Beyond shirt-- probably left the theater shaking his head, exclaiming to himself, "They just don't get Fulci!"

Sweeping generalization: American audiences want logical movies. They want things to flow succinctly, smoothly, and clearly from one shot to the next. Italian audiences seem less interested in this kind of composition if their horror filmmakers are any indication. Fulci, Dario Argento, and Mario Bava all seem to forgo the necessities of plot for the galvanizing display of gore.

It might be acceptable if the characters weren't so stupid. David Warbeck, as MacColl's half-hearted love interest, must shoot ten zombies in their torsos before finally realizing that only head shots will destroy them. And yet, he continually wastes ammo making below-the-head shots. This happens so often that you throw up your hands in exasperation at the ineptitude of the movie and its characters.

The worst part is the death of the guard dog...he's the only character in the movie you care about, and the only actor who didn't volunteer to be in this crummy enterprise, so you feel rather cheated that Fulci would do the dog in. Alas, the only justice of this movie is that the dumb characters get what they deserve for being so dumb, and the audience is able to have a good time laughing at their stupidity--and the film's. ★
by Jacob Lusk @ pannedreview
Email ThisBlogThis!Share to TwitterShare to FacebookShare to Pinterest
Tags 1980, Lucio Fulci