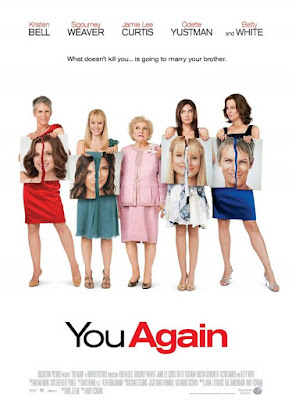 You know you're in for it when the lead character (Bell) is overshadowed by the other characters, none of whom are well-defined beyond some shallow caricature. Bell, who had pimples and glasses in high school and became the class scapegoat, has turned her life around nearly ten years later as a successful public relations analyst who's just been handed a big promotion. But her brother (James Wolk), a schmaltzy pastiche of a 50's goody goody and an 80's yuppie, has become engaged to the girl (Odette Yustman) who terrorized her during her ugly duckling phase. Soon the rest of the plot unravels before our eyes: Bell's mom (Curtis) was the one-time BFF and later the arch nemesis of Yustman's Aunt Mona (Weaver). Some kind of catfight showdown is surely on.

The plot is promising, but the script by Moe Jelline is ill-conceived: it's a bad mix of some wedding weekend gone awry and some high school nostalgia piece. If the actions of these characters were even a little believable or made even a little sense, we might be more inclined to forgive the scattershot laughter and the limp jokes. The presence of talent does not guarantee that the talent will deliver the movie from incompetence, and to see such a waste here (how do you get Cloris Leachman and then only show her for 30 seconds?) is truly disheartening. ★
by Jacob Lusk @ pannedreview
Email ThisBlogThis!Share to TwitterShare to FacebookShare to Pinterest
Tags 2010, Betty White, Cloris Leachman, Jamie Lee Curtis, Kristen Bell, Sigourney Weaver, Victor Garber