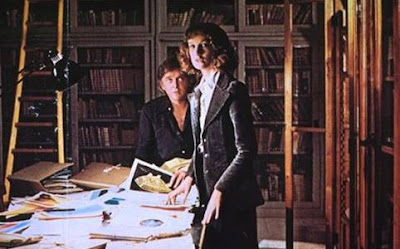 Profondo Rosso (Deep Red) (1975) is an Italian giallo thriller (in Italian giallo means "yellow" and specifically refers to the yellow covers of popular Italian mystery and crime novels). It's about a psycho killer running amok, and a musician (David Hemmings) who sets out to determine the killer's identity after he witnesses one of the slayings. Inevitably, Hemmings winds up at each crime scene and becomes incriminated in the murders himself.

The movie was directed by Dario Argento, whose body of work often emphasizes outlandish style over narrative structure or characterization. The excessive, exuberant violence and gore will more than likely alienate most viewers other than those who enjoy that sort of thing. Despite the dumb, sometimes incredulous aspects of Deep Red's plot, there's something about the movie that stays with you long after you've seen it. If you try and think about Deep Red, you will see through its plot holes and be left feeling cheated. If you try and feel your way through Deep Red, you will experience it as it was intended to be: a visceral sensation, like something out of a nightmare. This is not to let the movie off the hook for being essentially a stupid thriller with lots of red herrings and characters making idiotic mistakes. But I think it's too easy to dismiss the movie altogether for those reasons, particularly when you realize that the movie had a profound effect on the horror genre in America.

Deep Red's fingerprints are all over movies like John Carpenter's Halloween (1978) and the myriad "slasher" movies that become popular fodder for young audiences in the late 70s and early to mid- 1980s. Most of these movies are bottom-of-the-barrel trash, from the bad writing to the creaky acting and even creakier production design. Deep Red is at the head of the pack in a way. The garishly red, comic-book blood doesn't look real, and yet, we're left just as unsettled because of the way the camera lingers, even enjoys, the violence (which is usually directed against women). There's a fetishistic obsession with human disfigurement that is at times disturbing, but all of this is aimed at eliciting that visceral reaction from the audience which I mentioned earlier. Nowhere more than in an Italian horror movie is the audience member both the primary victim and perpetrator of the gruesomeness. ★★½
by Jacob Lusk @ pannedreview
Email ThisBlogThis!Share to TwitterShare to FacebookShare to Pinterest
Tags 1975, Dario Argento