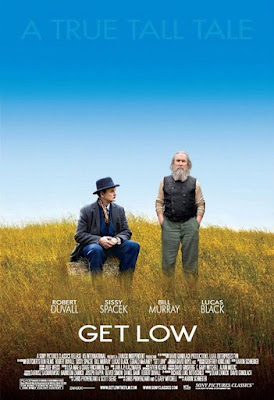 Get Low begins with a burning house on a dark, deep Tennessee night, and suddenly a figure moves from the left side of the frame toward the middle and then to the right until it vanishes just as quickly as it appeared. It's the story of a hermit named Felix Bush (Robert Duvall) who has been the focus of much local gossip and story-telling for the forty years that he's lived in seclusion. Suddenly in the winter of 1938 he comes to town and announces to the local mortician (Bill Murray) that he wants to throw a funeral party to which the whole town is invited.

The dark comedy and the Southern gothic have never made a more peculiar match than in this aged-in-wood "tall tale," which presents a perfect opportunity for Murray, whose deadpan brand of humor is so well-suited to this particular vein of comic movie-making. As Felix's life moves from intensely private to suddenly public, the relationships between he and Murray (and Murray's assistant, played by Lucas Black) become strangely compelling and sympathetic, despite Felix's gruff, pushy, stubborn behavior and Murray's opportunistic money-grubbing.

In the midst of Felix's quest for a public, "living" funeral--one where he can finally lay to rest some of the demons he's been living with for forty years--he rekindles his friendship with Mattie (Sissy Spacek), who remembers him as he was--charming, handsome, and much deeper than the taciturn persona that has developed about him through years of gossip and unanswered questions.

The movie is slow, but on the other hand, it allows us to live with the absolute solitude the characters seem trapped within. It's got the look of a Southern-fried nightmare at times: scenes pulsate with eeriness, and yet this isn't a horror movie (although it's a bit of a ghost story, in a way...without the actual ghosts, perhaps). It's also palpably sensual: You can almost smell the rabbit cooking in Felix's kitchen, the trees as he chops through them with an axe; you can almost feel the dirt under his fingernails and the chill of the ghostly winter, as a faint but persistent aroma of smoke wafts through the landscape. The delightfully sarcastic humor saves it from being stagnant, and the humanizing performance of Robert Duvall transforms Felix from ominous to endearing.