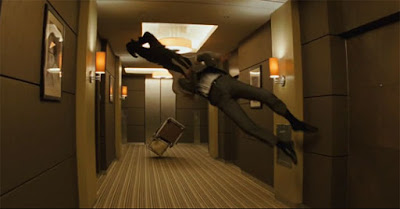 Directed by Christopher Nolan of The Dark Knight (2008), it's like a blend of A Nightmare on Elm Street and Memento. Leonardo DiCaprio plays Dom Cobb, a dream “extractor,” who makes his living assembling and then inhabiting other people’s dreams in order to steal ideas. Faced with the consequences of failing a mission (his corporation doesn’t tolerate failure), as well as his fugitive status in America (the movie is mostly set outside the U.S., particularly in Paris), Dom assembles a team of fellow dream inhabitors to undertake a new kind of mission: Inception, or the planting of an idea into another person’s mind through dream assemblage and manipulation. Their target is the son of a dying corporate executive (Cillian Murphy, playing against type as a good guy). Murphy was Nolan's villain in Batman Begins and it's difficult here to treat him as the soft-hearted dupe who's a pawn in DiCaprio's ploy. On top of everything else, it seems a sophisticated shrink--or maybe a sophisticated hooker--could have planted the "idea" (dismantling his father's empire) into Murphy's mind without all this dream-meddling nonsense. Meanwhile, Dom has his own demons to fight. His nutbag of a wife (Marion Cotillard, whose character seems like something out of Play Misty For Me) keeps popping up in these dreams and dreams-within-dreams, which of course complicates Dom's mission. If it sounds like convoluted gobbledygook, that’s because it is.

Nolan said he wanted to make a movie that delivered the type of exciting pay-offs he expects at the movies: so that means lots and lots of explosions. Bang, boom, bang is the rhythm of Inception, beating to the signature of an intense, enveloping score (by Hans Zimmer) that at times recalls something Bernard Herrmann might have done for an Alfred Hitchcock picture (particularly Vertigo) except that this score rarely experiences a lull of subtlety. And of course all the booming happens in dreams—which we know are dreams. Nolan (who also wrote the screenplay) has constructed a complicated set of rules in order to protect his story from scrutiny. If you get shot in a normal dream, you just wake up. But if you’ve been sedated before hand and you get shot, you go into limbo and your brain turns into mush.

The movie—despite its complicated plot—is admittedly exciting and involving in a superficial sort of way. After all, Nolan is one of the best at making the Bang Boom Bang fantasy sleek and shiny looking. But it’s got an inflated sense of grandiosity that you will become acutely aware of if you’re trying to read between the lines. (This seems the case with all his movies.) You leave the theater feeling as though you’ve been bombarded—the whole film is one major sensory overload—which to some is great moviemaking but to others who see it for what it is is just filling space with busyness. How much character development could we have exchanged for all those falling buildings and bombs going off and cars smashing? Indeed, the fact that all this happens in the dreams is a sort of relief--you can simply disengage from it without feeling you're missing anything.

There’s a great line by Edgar Allen Poe: “Is all that we see or seem but a dream within a dream?” John Carpenter used this line to preface his 1980 chiller The Fog, and Inception seems to take its cue from Poe as well, but of course in a very different direction. It has one very intriguing component going for it: The act of going to the movies isn’t so far removed from the act of dreaming. When we go to the movies, we seek escape from reality, and it’s as if time stands still while we’re sitting in the darkened theater. When we walk out, we forgot if it was daylight; or if it’s gone from light to dark, we feel a strange sense that the movie had something to do with the alteration (but in reality the movie only passed the time--it didn't affect it). Inception delves into the subconscious dream state like no other movie before, and Christopher Nolan has plenty of fascinating material with which to work, but we shouldn’t be fooled into believing that this is some kind of masterpiece, even if it’s better than the rest of the summer junk of which it is simply a higher grade. With Joseph Gordon Levitt, Ellen Page (who's got a refreshing air about her as Dom's young protegee), Tom Hardy, Ken Watanabe, Dileap Rao, Tom Berenger, and Michael Caine (in a thankless role as Dom's father-in-law). 148 min. ★★
by Jacob Lusk @ pannedreview
Email ThisBlogThis!Share to TwitterShare to FacebookShare to Pinterest
Tags 2010, Christopher Nolan, Cillian Murphy, Joseph Gordon Levitt, Leonardo DiCaprio, Marion Cotillard, Michael Caine, Tom Hardy

So funny that you just reviewed this. I was listening to an NPR review of this not 15 minutes ago and wondering if you'd seen/reviewed it.

i can't stop hearing about this movie. i want to see it.