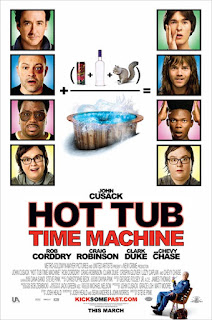 As someone with a fondness for all things 80s, the premise of Hot Tub Time Machine appealed to me: three middle-aged losers (John Cusack, Craig Robinson, Rob Corddry), in an effort to relive their glory days, take off to a ski resort they visited in 1986. Time has not been kind to them or the resort, which is now a dilapidated relic bearing only a faint reminder of happier, more irresponsible days a quarter of a century earlier. Then something strange happens with the help of a hot tub that is apparently a time portal, and the guys (along with Cusack's nerdy 20-year-old nephew) are transported back to that fateful weekend of 1986. The mirror reveals that their youthful appearances have returned (except for the nephew, who technically isn't even born yet). Okay, I laughed out loud a lot during this retro comedy, but as I think back with a more critical mindset, I'm struck by the fact that much of the movie spends its time documenting arguments where Corddry, the biggest loser of the group, makes himself look less and less credible as a human being. Cusack, who is the most recognizable face among the main characters (as well as the only one to have been acting in the 80s), is expected to carry the film but his character isn't anymore well-defined than the others. Hot Tub is typical of today's comedy: it takes refuge in its pop culture references, and forgets that having a compelling and ironic story of its own is the heart of any movie, regardless of the genre. Chevy Chase is wasted in a stupid role as  a mysterious repairman who seems to be aware of the group's time traveling woes, and talks in pseudo-Buddhist jargon (not unlike his character in Caddyshack). Crispin Glover (he played Michael J. Fox's dad in the Back to the Future movies) has one of the funniest parts, as a bellman whose arm--missing in 2010 but intact in 1986--provides a running gag. ★½
by Jacob Lusk @ pannedreview
Email ThisBlogThis!Share to TwitterShare to FacebookShare to Pinterest
Tags 2010, Chevy Chase, John Cusack