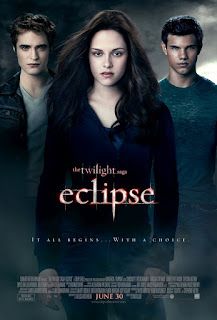 I skipped New Moon because I saw the first Twilight movie, which was WB-grade storytelling at its finest. Eclipse offers more of the same mixed with a compulsion to become comparable in scale to Lord of the Rings and the Harry Potter series. Armed with a less than exciting threat from an army of new vampires, the Eclipse writers attempt to fill one half of their movie with the impending suspense of an all-out vampires vs. vampires war.

The other half lingers over the love triangle between Bella (Kristen Stewart, who I was relieved to see making fewer facial twitches in her attempt to emote something) and Edward (Robert Pattinson) and Jacob (Taylor Lautner). While both the chemistry and the credibility of a Bella-Jacob relationship is forced, I think Edward and Jacob might want to consider opening up a bed-and-breakfast in Vermont together. I think it was mainly Jacob's shirtless, cut-off jeans look that prompted this reaction. Moreover, it appears that someone (possibly director David Slade or screenwriter Melissa Rosenberg) watched the volleyball scene in Top Gun and decided to recreate it throughout this entire movie.

If Twilight offers anything, it's a chance to keep in touch with fashion. Thankfully, in order to appear in a Twilight movie, one must be beautiful enough and well-dressed enough to grace the cover of Vogue (CGI helps with this process as well). Do the actors ever get depressed seeing themselves looking so perfect on film when in real life they surely must have deficiencies? Perhaps a scar, a mole, a little cottage cheese? I don't think we're meant to put that much thought into this, nor are we meant to wonder at the confused logic informing the motives of the Twilight characters: Bella wants to be like Edward because she doesn't feel normal as a human. Edward doesn't want her to lose her soul, but other than his bleak promise of such a thing happening, he seems to have a pretty good life: nice house, never aging, and sparkling in the sun. It's really just so perfect if you think about it. On the other hand, Jacob has a better tan and there's also the advantage of not having to fill bleak, rainy Washington days knitting shirts for him.

I also thought this movie made a compelling case for the "no means no" slogan. I mean, the way Bella forced herself on Edward like that was just...a sickening abuse of her charms.

Of course, the big question is: Will this series end with a Graduate moment? Where they supposedly get what they want, only ending the film staring bleakly with an expression that reads: "OMG what did we just do?!" ★½
by Jacob Lusk @ pannedreview
Email ThisBlogThis!Share to TwitterShare to FacebookShare to Pinterest
Tags 2010, David Slade, Kristen Stewart, Robert Pattinson, Taylor Lautner