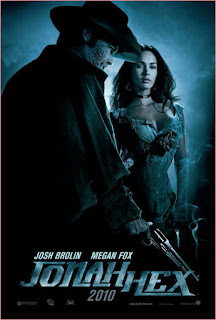 I occasionally get the chance to see a movie without any conception of its plot. That's how I entered the theater for Jonah Hex. No trailer in my mind to offer some point of reference or on which to base a sense of expectation. All I did have was a friend's categorization of it as a "neo-Western" starring Josh Brolin and Megan Fox, the lady who has all the boys drooling in Transformers (presumably because of her well-defined acting talent).
Cue the eye-rolling as the icon for DC Comics appears on the screen. Yes, I found myself trapped in a screening of a graphic novel put to film. I had the misfortune of encountering graphic novels in a graduate American Lit seminar. They have audaciously been carted up to the great gates of the literary canon in hopes of gaining admittance.
Of course, graphic novels have one very strong and worthwhile asset: fascinating artistic imagery that heightens the visual senses. On the other hand, they tend to come off as hacky, as though they were conceived by 31-year-old guys who never progressed beyond their parents' basement. The Tarantino posters have cobwebs on them and the copyright date on the Sports Illustrated Swimsuit edition is 1995. Ditto the most recent pair of underwear.
Josh Brolin may never recover from the success he had with No Country For Old Men. However, he will probably continue to get amusing, gritty, anti-heroic parts for a while, which is better than doing daytime television roles or yogurt ads.
Jonah Hex is a bounty hunter in the 1860s (post-Civil War) where a nutjob Confederate is plotting to destroy America with advanced artillery of an apocalyptic nature, on Independence Day. Of course, this is the same villain who savagely murdered Jonah's wife and son while he watched helplessly. Thank goodness for the stark sense of good and evil that graphic novels provide, otherwise we might never know whose side to be on. Megan Fox plays a sharp-witted prostitute who wields kisses and knives with equal force and skill. It's refreshing to see Fox playing something other than the Maria von Trapp roles she normally gets...

The movie itself isn't all that terrible, but it's just sort of ridiculous. And because the source material is so bleak looking and heavy-handed, Jonah Hex, like all its other relatives in the graphic novel medium, lacks the leavening sense of humor (even though Brolin's character dispenses enough one-liners to sink the Q.E. II). Will Arnett (Gob on Arrested Development) has a thankless role--that made me laugh because I've never seen him play a serious character before (he certainly has the deep voice for it). The best thing about Jonah Hex? Its mercifully short at just over 70 minutes, but that doesn't forgive it for wasting an hour and ten. ★
by Jacob Lusk @ pannedreview 1 comment:
Email ThisBlogThis!Share to TwitterShare to FacebookShare to Pinterest
Tags 2010, Josh Brolin, Michael Fassbender, Will Arnett 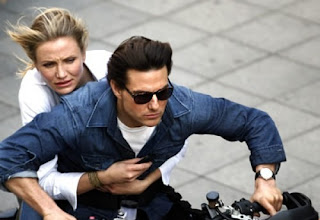 Knight and Day is somewhat of an updating of Alfred Hitchcock's North By Northwest in the sense that it offers us a fun adventure through a number of exotic or romantic locations around the world. Quickly leaving the U.S. behind for Austria, Spain, South America, even a tiny island in the middle of the ocean, this movie attempts to get in touch with the fun that Hollywood seems to have lost amidst the crusade for big, big, bigger pictures. And while Knight and Day has its share of explosions, we're always keenly aware that it's about two people.
The camera reminds us often enough with countless close-ups of stars Cameron Diaz and Tom Cruise, who uses that unflattering image of himself jumping up and down on Oprah's couch to inject a frenetic, witty energy into his character. Come to think of it, Cruise may not be doing anything new, but given the bad press he's received over the last few years, it's good to see him doing something we're supposed to be laughing at. He plays the rogue CIA guy with whom Diaz--just an ordinary girl from Boston--becomes enveloped after a chance encounter at an airport. It turns out, the CIA is after Cruise because they think he's crazy and dangerous. He insists they're wrong. At least about the crazy part.
Diaz undergoes numerous blackouts due to Cruise drugging her periodically, which should be a red flag for a woman on any date with a guy who accuses the world of being out to get him. But in a movie, it's all done with good reason--for her own good, of course. Cameron Diaz has always been a very plucky heroine, and Knight and Day utilizes this to the hilt. There are moments when the movie soars above the sense of deja-vu that could have damned it as a dreadful bore, and a lot of that depends recklessly on the kinetic likability of the two leads. It's good to remember that the Hollywood media machine enjoys spitting its "has-been" celebrities out, but that doesn't mean we have to. And Cruise and Diaz prove that just because they're not new doesn't mean they can't show us a good time. They're professionals. ★★★
by Jacob Lusk @ pannedreview No comments:
Email ThisBlogThis!Share to TwitterShare to FacebookShare to Pinterest
Tags 2010, Cameron Diaz, Tom Cruise 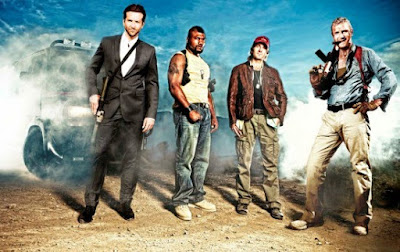 The A-Team is a surprisingly fun and exciting update of the 1980s television show. Four rogue army rangers (Liam Neeson, Bradley Cooper, Quinton Jackson, and Sharlto Copley) band together against a plot to make billions of dollars in counterfeit bills with U.S. currency plates, stolen by the Iraqis but now in the hands of corrupt CIA personnel. A self-serious action movie can be deadly, and it's the overarching sense of humor that gives The A-Team life and allows the audience to enjoy it.

There are two interesting questions worth exploring with The A-Team movie. First, how ironic is a movie about a plot to counterfeit U.S. money when in real life the dollar is declining in value with every passing year/month/week/day? Second, how much do we really buy/respect women in positions of power? Jessica Biel plays a tough and confident military captain at odds with the A-Team until she finds out they're good. She has an important job where she makes life and death decisions. Do we as an audience believe she can pull this off? Obviously, choosing the right actress was key in making her character strong and convincing. I think Biel as a casting choice worked well.

The standout in this film was Patrick Wilson as CIA agent Lynch. Wilson has really done well in a wide variety of films, from the musical (The Phantom of the Opera in 2004) to the drama (Little Children, 2006) to the magnormous graphic-novel-come-to-life (Watchmen, 2009). His character starts off as sort of forgettable, but as he becomes more integral to the story, Wilson displays a wonderfully comic attitude that makes him likable even when he's not supposed to be. ★★★ 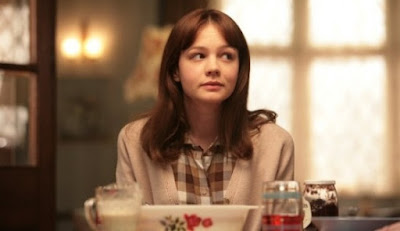 Carey Mulligan plays a curious young woman growing up in Britain who falls in love with a man some ten years older than her (Peter Sarsgaard). She sees him as sophisticated and lavish and fun. But his carefree lifestyle comes at a high price. The title, An Education, serves as both a candid synopsis of this movie's plot as well as a nod to English novels of old that purported to teach women how to behave, what to think, and how to live. This movie asks the question: why do we teach our young people (particularly women) the things we teach them? What kinds of ideals do we hand down to them and with what expectations? Mulligan's character confronts these questions herself and lives through them in a poignant and intelligent movie with a heart like its heroine: equal parts soft, tough, naive, witty, stubborn, vulnerable, and resilient. With Olivia Williams, Alfred Molina, Cara Seymour, Dominic Cooper, Rosamund Pike, and Emma Thompson. Directed by Lone Scherfig. ★★★
by Jacob Lusk @ pannedreview No comments:
Email ThisBlogThis!Share to TwitterShare to FacebookShare to Pinterest
Tags 2009, Carey Mulligan, Dominic Cooper, Emma Thompson, Olivia Williams, Peter Sarsgaard, Rosamund Pike
Newer Posts Older Posts Home
Subscribe to: Posts (Atom)