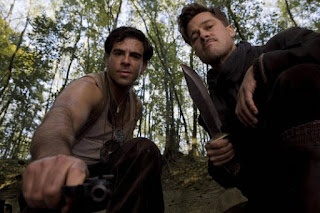 I finally watched Quentin Tarantino's latest movie, Inglourious Basterds, a film that, unlike most historically-themed productions, is blatantly upfront about its historical revisionism. And indeed that is where all the fun is to be had.

While Brad Pitt and his troupe of American Nazi-killing soldiers (incuding Eli Roth, B.J. Novak, Til Schweiger, and Omar Doom) may be the eponymous "basterds," their screen time seems a bit minimal as Tarantino takes us into Paris, where the basterds, in cahoots with a German actress (Diane Kruger) working for the Allies, are planning a show-stopping Nazi judgment day at the screening of a German propaganda film featuring a Nazi soldier (played by Daniel Bruhl) who single-handedly killed over 300 enemy soldiers. Those in attendance include prominent figureheads of the National Socialist German Workers Party, including Propaganda Minister Joseph Goebbels (Sylvester Groth) and the Fuher himself, played by Martin Wuttke. Meanwhile, the owner of the cinema (Melanie Laurent), has her own plans of "painting the town."

Brad Pitt's performance is funny, but his sporadic screen time makes it difficult to decide who's supposed to be carrying this movie. Laurent's character certainly has the most fictional backstory and motive. Pitt is just there to crack quasi-ironic jokes in a Southern drawl while his men butcher Nazi soldiers. The story shifts back and forth to different storylines, most of which are fascinating to watch even if they render the movie somewhat discombobulated (and they're not without ample bloodshed). As per usual, Tarantino manages lots of engrossing conversation between his characters, something for which he certainly possesses a knack.

Much good talent is on display here, and the Nazis are successfully represented as slimy, calculating and cold. (But what about the "heroes"?) Christopher Waltz is particularly convincing as the primary villain in this film, a detective working for the SS to track down Jews in hiding, known all over Europe as "The Jew Hunter."

Even if a historian might be mortally offended about how Inglourious Basterds laughs in the face of history, its very audaciousness makes it worthwhile. Tarantino made a lot of people notice him with his debut Reservoir Dogs (1992) and exceeded that with the tremendously successful Pulp Fiction (1994). He really had nowhere else to go but to take something on an epic scale such as World War II and manipulate it into his particular style of gory, violent, loquacious insanity.

Whether or not Tarantino reduces Jews to the same level as their torturers is an interesting question to pursue. Or perhaps this movie is more cathartic than that. ★★★
by Jacob Lusk @ pannedreview
Email ThisBlogThis!Share to TwitterShare to FacebookShare to Pinterest
Tags 2009, Brad Pitt, Diane Kruger, Michael Fassbender, Quentin Tarantino