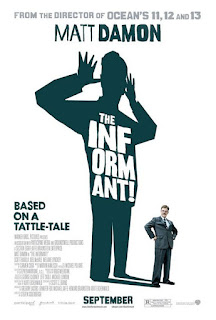 Director Steven Soderbergh has a penchant for movies about crime with a neo-noirish feel. The Informant! isn't exactly film noir, maybe film noir light. It hits on a subject that resonates clearly in the 21st century: corporate crime. Based on the apparently true story of Mark Whitacre, an employee for a company called ADM who decides to blow the whistle on some illegal price-fixing going on in his company, The Informant! is a movie that refuses to let you rest comfortably in your assumption that you've got its main character (played very well by Matt Damon) figured out.

Damon is surrounded by wonderful co-stars: Scott Bakula and Joel McHale (from Talk Soup and Community), Melanie Lynskey, Scott Adsit (Pete from 30 Rock), Thomas F. Wilson (Biff from Back to the Future), Tony Hale (Buster from Arrested Development), and Ann Cusack, among others.

The Informant! is rather interesting when compared to Food, Inc., the documentary I recently reviewed. The company for which Damon's character works is involved in the processing of corn, a food that seems to be almost magical in the variety of its utility.

Perhaps the standout of this movie is Marvin Hamlisch's music score, which is reminiscent of old spy and cop thrillers from the 60s and gives the movie an impressive, ironic feeling, particularly when the music that should be accompanying a chase scene or something else very exciting is layered over a quiet, seemingly blase moment in the film. It's a nice touch, and one that reminds us we're watching a parody.

It's not as laugh-out-loud funny as In the Loop, my favorite comedy of 2009, but it's certainly up to par in smarts, and has such wonderful irony that it demands a second viewing. ★★★