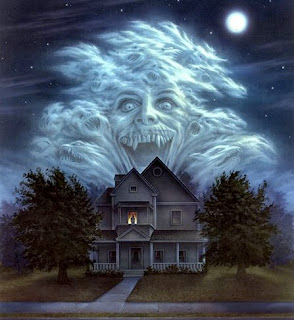 Vampire freaks, rejoice! I recently revisited Fright Night (1985), writer-director Tom Holland's valentine to the horror genre in which a teenager named Charley Brewster (William Ragsdale) becomes convinced that the suave bachelor who recently moved in next door (Chris Sarandon) is actually a vampire. Lacking any empirical evidence, Charley turns to a has-been TV horror host named Peter Vincent (Roddy McDowall), as well as his girlfriend Amy (Amanda Bearse) and his friend "Evil" Ed (Stephen Geoffreys), who has some knowledge of how to successfully ward off vampires.

Fright Night works because it's the right balance of funny and scary. Holland's script and directing offer plenty of amusing moments for film buffs (such as Sarandon's imitation of the vampire in 1922's Nosferatu rising from his coffin). Meanwhile, Charley Brewster is a character absorbed in horror movie culture in a very surfacey way. He enjoys watching them on TV with the campy narration of Peter Vincent, but the real horrors render him unable to respond on his own. 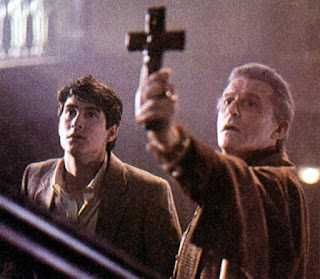 Chris Sarandon is perfectly cast as the bloodsucker, Jerry Dandridge, and McDowall is a wonderfully spineless foil. The special effects become the star at the end, and although they were probably impressive 25 years ago, they're a bit dated now. Fortunately, the movie itself has endured with its sharp sense of humor and well-calculated scares. The vampire is indeed an enduring literary and cinematic figure, and of all the vamp flicks to come out of the 80s, Fright Night is the most successful overall. It has all the things a good vampire movie needs: strong characters who are often somewhat ambiguous rather than black-and-white in their morality, set pieces that truly stand out (like when Peter Vincent makes a terrifying discovery in Charley's mom's room), and dialogue you can quote: "To what do I owe this dubious pleasure?" "Welcome to Fright Night...For real." ★★★
by Jacob Lusk @ pannedreview
Email ThisBlogThis!Share to TwitterShare to FacebookShare to Pinterest
Tags 1985, Chris Sarandon, Roddy McDowall, Tom Holland