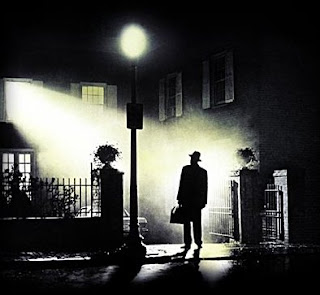 Thanks to Netflix, I was able to satisfy my desire to revisit The Exorcist (1973), the shocker that caused quite a furor upon its theatrical release, where apparently some viewers couldn't handle its subject matter. Adapted by William Peter Blatty from his bestselling novel (based on actual events of an alleged case of possession, although the sex of the child was changed from a boy to a girl for Blatty's version), and directed by William Friedkin, The Exorcist has garnered a lot of intense debate over the course of its now 37 years of existence: is it groundbreaking, the most terrifying movie ever made, or just simply sick and twisted? Well, maybe a little of everything.

I certainly recommend viewing of this movie only for those with strong stomachs and more importantly strong appetites for supernatural horror. If you actually believe in a spiritual realm, The Exorcist is all the more unsettling, because it bores through the security of 20th century modern America (or, in our case, 21st-century). Much as Bram Stoker's 1897 novel Dracula took the pulse of an end-of-century London that felt superior in its civilized-ness and technological advancement, The Exorcist offers the chilling possibility that all that we see is not all there is, and that forces exist beyond our explanation or control.

Of course 20th-century Catholicism, at least through the lens of this movie, is just as cynical as the rest of the civilized world, and a troubled, spiritually doubting priest named Father Karras (Jason Miller) becomes the last resort of an actress named Chris MacNeil (Ellen Burstyn), whose daughter Regan (Linda Blair) has undergone an inexplicably bizarre change in her personality.

Having exhausted all the scientific and psychological remedies, MacNeil goes against her better judgment in the effort to save her daughter, who's become possessed: she's violent, given to levitation, and rather foul-mouthed, too.

The Exorcist is so cleanly put together, so professionally done, that its technical impressiveness and dramatic "maturity" must have had the Academy of Motion Picture Arts and Sciences in a tizzy. After all, they'd never had to nominate horror pictures for major Oscars like Best Picture, Director, Actress and Adapted Screenplay before. So despite the fact that The Exorcist may have become dated or altogether relegated to its time period of the 1970s (many people associate the decade with lots of good, important movies, myself included, so this isn't necessarily a negative point), it may deserve more points than we've given it for demonstrating the credibility of horror as a genre, and not just one made to entertain people in some primitive way. 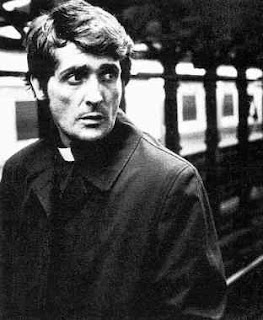 On the other hand, it's probably true that people flocked to see this movie more than anything because of its sensationalism. The horrible things 12-year-old Regan does to herself, the impressively grotesque make-up effects and the way she spins her head around, the myriad demonic voices (created in part with the talents of actress Mercedes McCambridge), and of course the green vomit, are nothing but sensationalistic. It's a mixture of "high," "sophisticated" 70's drama (at times Burstyn reaches delightful levels of histrionics) and Grand Guignol of the ickiest nature. 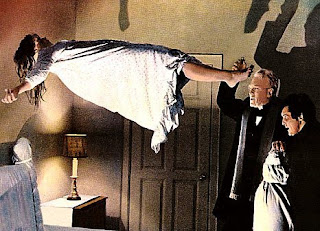 Max von Sydow, in a pivotal role at the end (and briefly at the beginning) as the starchy-white old exorcist, has a wonderful line in reference to the demon--or Devil--inside Blair: "He will mix the truth with lies to confuse us." I thought it was wonderful. The music is also noteworthy, particularly Mike Oldfield's "Tubular Bells" but also the creepy strings used throughout.

Overall, The Exorcist might be worth seeing if you have an interest in demonic possession and want to see it Hollywoodized 1970's style, or if you're in the mood for spine-tingling thrills mixed with moments of unexpected laughter. Sometimes when the devil speaks you can't do anything but laugh. If you want something a little less graphic but still quite fascinating, try 2005's The Exorcism of Emily Rose with Laura Linney and Tom Wilkinson.