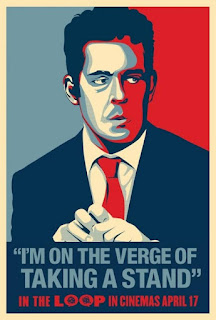 There's a scene fairly early on where James Gandolfini, playing a long-time U.S. general, and Mimi Kennedy, as the U.S. Assistant Secretary of State, retreat from a party to an upstairs bedroom of a D.C. house where they're discussing some top secret information about a possible war with the Middle East, using a child's calculator--with pink plastic lining and nursery rhyme sound effects emanating from it--to figure out the number of soldiers they're expecting to lose during the course of battle. That scene exemplifies the satirical current that flows through In the Loop, a movie where the children have taken over the park, and are playing in an enormous sandbox of global proportions and global consequences.

It's a wickedly funny British poli-satire directed by Armando Ianucci and written by Ianucci, Jesse Armstrong, Simon Blackwell, Tony Roche, and Ian Martin, that crosses borders between the UK and the US quite frequently. The political tidal wave is triggered in London, where a bumbling British politician named Simon Foster (Tom Hollander) makes a statement (that war with the Middle East is "unforeseeable") which provides him with enough political rope to hang himself and his career. The Prime Minister's raging, vein-popping, foul-mouthed Director of Communications, named Malcolm Tucker (played by Peter Capaldi) steps in to try and clean up the mess, but Foster keeps putting one foot in his mouth in the effort to get the other one out. It's so hysterically funny that it's nothing but absolutely believable. Watching In the Loop, it's almost as though someone had snuck cameras into every behind-the-scenes meeting in Washington and London for the world to see what it's really like for the underlings trying to make sense of the inner-workings of foreign policy, diplomacy, and the domestic ranglings that go on in our political centers.

The cast also includes Gina McKee, Chris Addison, David Rasche, Anna Chlumsky, and Olivia Poulet. This may be the funniest film of the last year. It's certainly one of the most intelligent--and grim in its own disturbingly satiric accuracy. ★★★½
by Jacob Lusk @ pannedreview
Email ThisBlogThis!Share to TwitterShare to FacebookShare to Pinterest
Tags 2009, Mimi Kennedy, Tom Hollander