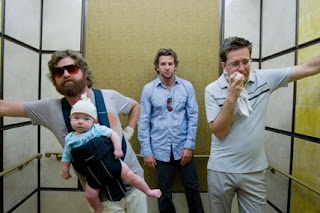 There's been much ado about The Hangover, my review of which is admittedly way late. It's about a Las Vegas bachelor party gone awry: the groom's three buddies awake the morning after to find their friend Doug (Justin Bartha) missing and their memories of the previous night as fuzzy as their knowledge of his whereabouts. They slowly piece together the events that led to their current dilemma, through a series of often chaotic comic vignettes.

The Hangover gives us easy laughs. Too easy, in fact, and yet this is being lauded as kind of a monumental comedic achievement by some. The characters are typically one-dimensional, utterly unlikeable ex-frat-boy types, who don't really even seem to like each other.

Bradley Cooper is especially pompous as Phil, the bronzed, athletic bachelor-type who happens to be a married science teacher. Unbelievable as his character is, he is alternately an irresponsible jerk and the determined leader of the group. Then there's Stu (Ed Helms), the dentist, perhaps the most successful--economically speaking--of the group. He's trapped in a dead-end relationship with a woman who's too much of a tyrannical nag to be sympathetic in her fear that her boyfriend will venture into a strip club during his Vegas exploits. (However, he's lied to her that they're going wine-tasting in Napa Valley instead.) Given the revelation (early in the movie) that she's cheated on him before, it's hard to buy the emasculating choke-hold she has over him, and much easier to accept his drunken Britney Spears-style marriage to a stripper (Heather Graham) with a heart of gold. Last is Alan (Zach Galifianakis), Doug's loopy, unpredictably weird brother-in-law-to-be, whose wacky personality allows for much of the plot--if one can call it plot--to advance.

There are too many plot-holes in The Hangover to forgive, even if the movie gives us a passably entertaining hour and thirty minutes. It's a pastiche of Swingers, Bachelor Party, and the lesser-known comedies Mystery Date and The Night Before. From these four movies we get the main themes of The Hangover: Las Vegas weekend out-of-control, bachelor party out-of-control, Chinese mafia villains complicating the storyline, and missing friend/memory failures. You may want to watch The Hangover to save time, but I think any of those four movies is equally watchable (although all of them are fairly flawed).