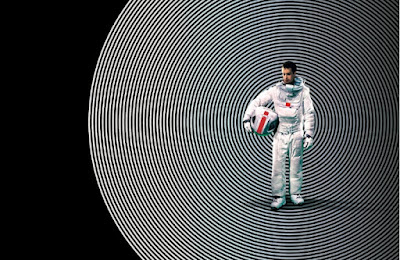 In Moon, Sam Rockwell plays Sam Bell, the lone crewman living on a lunar outpost where energy is harvested for around 70 percent of the earth. Sam seems fairly well adjusted to his solitary environment. His only company is a computer named GERTY (voiced by Kevin Spacey). For a good half hour or so you wonder if we’re supposed to stand up and applaud the filmmakers for having seen 2001: A Space Odyssey enough to reference it in myriad ways. It’s not just the computer reminiscent of HAL, but even some of the shots, such as the scenes of Sam exercising that recall Gary Lockwood maintaining his fitness regiment aboard the spaceship in 2001. Fortunately, Moon changes things up, offering a hypnotic, trippy and perhaps inconvenient, unsettling idea: that since clones are replicated human beings, they must certainly feel pain, grief, loneliness, sorrow, joy, angst, etc.

Sometimes it seems that science fiction is the most difficult genre in which to create original ideas, but maybe the problem is that not enough people who make science fiction movies have read enough and seen enough outside the genre. Time will tell what becomes of the careers of first-timers Nathan Parker (screenwriter) and Duncan Jones (director). They’ve obviously had plenty of exposure to sci-fi, because Moon has a good deal of the paranoid corporate thriller that was perhaps more terrifying than the alien in Alien. However, they aren’t too worried about looking like the movies that have shaped their own, because Moon manages to remain something interesting on its own terms.

As for Sam Rockwell (who resembles Eric McCormack), his acting deepens with every scene, and the fact that he’s a bit obscure serves the movie well. It would have been disastrous to cast Tom Hanks or some other mega-star. Sam Rockwell is much more of an everyman. Kevin Spacey’s vocal performance isn’t too demanding for him as an actor, and I’m curious as to why he took the part. (Perhaps it was simply because he believed in the work). “GERTY” is a fun expansion of the HAL character: it has a computer screen displaying a face with emotions that change constantly to reflect the appropriate response to its human counterpart.

Less pretentious than 2001, Moon is a much more internalized space thriller. Instead of showing us how machines have taken over, Moon shows us the precariousness of manufacturing human beings…they’re not less human, they’re equally as human, but it’s easy for the corporation that made them to sleep at night with clones manning their operations rather than humans. Of course, Sam doesn’t know he’s a clone until this is revealed to him by another clone. (Which begs the question: how did the other clone know?) It’s a perplexing set of questions to consider. ★★★
by Jacob Lusk @ pannedreview
Email ThisBlogThis!Share to TwitterShare to FacebookShare to Pinterest
Tags 2009, Duncan Jones, Kevin Spacey, Sam Rockwell